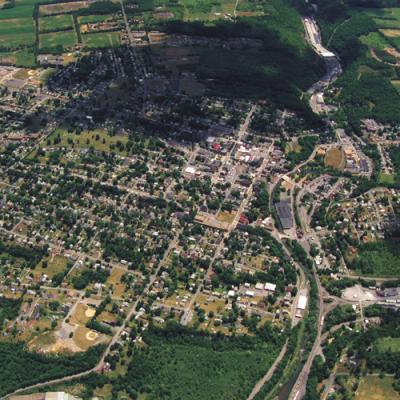 Last August, President Obama announced the Clean Power Plan (CPP), establishing "the first carbon pollution standards on existing power plants," according to Pa. Department of Environmental Protection's (DEP) fact sheet. States have until Sept. 6, 2016 to submit a strategic plan to lower their own emissions in compliance with these new standards.

Soliciting public input, the Pa. DEP held 14 "listening sessions" statewide, including one at Erie's Blasco Library on Oct. 29. Among those testifying were County Executive Kathy Dahlkemper, Benedictine Sister Pat Lupo, and Solar Revolution President John Purvis, who may have had the best one-liner of the night: "My parents didn't teach me to comply. They taught me to excel."

Erie Art Museum Director John Vanco, who also testified, has generously agreed to share his remarks with us, below. In our next issue, we'll feature the testimony of Sister Pat Lupo, just before the UN Climate Change Conference begins in Paris.

As we face this global crisis locally, may the words of these inspiring and visionary Erie leaders help us all to see Penn's forest for the trees.

Have you ever flown over Pennsylvania in a small plane? There used to be direct flights from Erie to Harrisburg, and, although it's been at least 45 years, I still remember the first time I took one of those flights. Our beautiful state, which looks like just acres and acres of trees when you're driving through it in an automobile, takes on a distinctly different aspect when viewed from above.

But an aerial view of the landscape looks like a flock of incompetent graffiti artists have attacked it. Logging roads, oil and gas wells, waste ponds, strip mines, power lines, pipelines, mine tailings. We have treated Penn's Woods like it was disposable. And in fact, we have disposed of a lot of its natural resources, not to mention its natural beauty.

So we live with the results. We have some of the most amazing pollution in the world. There's the Hughes Bore Hole in Cambria County, an artesian well that has been flushing out toxic metals from more than five square miles of mines since the 1970s. It discharges between 800 and 1,200 gallons into the Little Conemaugh River every minute of every day. That's something like 1.5 million gallons of heavily contaminated water every day.

We have treated Penn's Woods like it was disposable. And in fact, we have disposed of a lot of its natural resources, not to mention its natural beauty.

Pennsylvania is home to Little Blue Run Lake, the largest coal ash pond in the U.S. It's an artificial lake with a bizarre blue color (now faded to gray) about 30 miles northwest of Pittsburgh, right beside the Ohio River. It's filled with 20 billion gallons of coal ash and scrubber slurry, leaking arsenic, selenium, mercury, and other metals into the watershed.

Little Blue was actually created in the 1970s by First Energy Corporation, the same power company that services Erie. First Energy told the people who live in the nearby communities that this would be a beautiful lake, a recreational destination for swimming, boating, and fishing; but it's more like a chemical cesspool. First Energy has signed a consent decree to close the 1,700 acre site. Although no ultimate plan has been announced, it will almost certainly amount to sacrificing several square miles of Pennsylvania.

Pennsylvania produces 15 million tons of coal ash every year. It is stuffed into 77 ponds and 28 landfills. At least 21 of the ponds and 13 of the landfills aren't even lined — heavy metals are leaching out of them into the surrounding water tables as we speak.

Remember the coal ash disaster in North Carolina last year? The big one, right? Unfortunately it wasn't the big one — it was just the third largest coal ash spill in the U.S. There were two that were even larger! And they will continue to happen, including in Pennsylvania.

I probably don't even have to mention Centralia, the Columbia County town that sits on a coal mine fire that has been burning since at least 1962. It has brought everlasting fame to Pennsylvania, inspiring books, films, songs, and even a video game, not to mention all the jokes.

So, we can't continue to tear up the earth to pull out the coal, burn it to the detriment of the air, and dump the poisonous ash into our water. But, gas and oil are much cleaner, right? Well, no, they're not.

Even if we ignore the looming catastrophe — the largest ever faced by the human race — which is the overheating of our planet caused by the release of greenhouse gases from burning fossil fuels. Even without considering global warming, oil and gas drilling has left us a toxic legacy unmatched by any other American state.

Abandoned, uncapped, and leaking wells are everywhere. Although the DEP list of orphaned and abandoned wells totals just over 12,000, the best estimate of the number of gas and oil wells that have been drilled in Pennsylvania is 970,000. Methane, petroleum, and brine are leaking from tens of thousands of wells across the Commonwealth. Just dealing with the existing mess is going to occupy Pennsylvanians for generations.

Perhaps I should have talked about the benefits of alternative energy, especially energy efficiency, photovoltaics, and wind power. Despite a lack of public investment, despite disincentives and erratic tax policies, alternatives have already proven their absolute worth.

We don't have to dig up the earth to fuel them. They don't pump carbon dioxide, particulates, and heavy metals into the air as they are used. They don't leave tons of ash to be dealt with by future generations.

The Clean Power Plan promises that fossil fuel-fired power plants will operate more cleanly and efficiently, but that's not nearly enough. We have to stop.

We have options. But if we want to survive as a species, burning fossil fuels is not one of them.