It's not the party it was when he met them. They've changed. Things are different. And Cory Vaillancourt has an open letter to the Democratic Party with elections right around the corner.

by Cory Vaillancourt
View ProfileFacebookTwitterGoogle+RSS Feed
November 2, 2011 at 9:00 AM 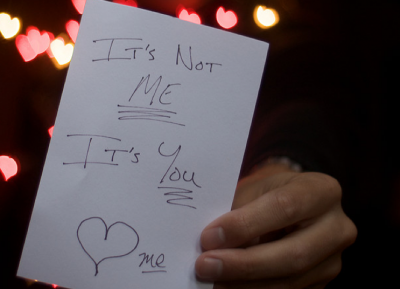 We've been together a long time now, perhaps 20 years by my count, so it is very hard for me to do this.  Sure, we've surfed the tides from the highest of the highs (remember that one time when we had a federal budget surplus? That was awesome!), to the lowest of the lows (Gore, Florida, '99), and I want you to know that whatever happens moving forward, I will keep it all in a special secret place deep inside my bleeding heart, forever.

Lately, your behavior has become bizarre and, quite frankly, disturbing to me. I know we've had our disagreements before (Hillary) but I'm just not sure if you deserve another last chance. Incidents have occurred that have led me to question our relationship as well as your sanity. You are not the Democratic Party you used to be, nor are you the Democratic Party you should be. I've always been attracted to you because we share the same ideals – namely, that we refuse to participate in the continuing search for the moral justification of greed – however, I'm beginning to feel that the Democratic Party I used to know has chickened out. I'm hoping it's just a phase, but I fear it may be something a bit more significant. Let me explain.

When we first met, you were younger, more vibrant, and better looking. You made me feel safe, because no matter what problems arose, I knew that you always had the right answer. You were creative and progressive and proactive. You were dynamic, reliable, and a great salesman, too.

We've got all these problems here at home, in Erie County, and what have you done about them? Where is that proactivity now, when we really need it? By the way, have you fixed that 911 call center yet? It's been broken for some time now. And what have you done about that nasty unemployment situation? Over the last four years, unemployment in Erie County has nearly doubled, and you've done nothing about it. It's really starting to affect everybody's pocketbooks around here, and the best thing you can come up with is that we consider selling our beloved Hassam? First of all, that would be but a Band-Aid on a bloody stump. Second, it's like, the only nice thing we have. And what about Pleasant Ridge Manor? They've needed new fire sprinklers for five years now, and you've continued to kick that can down the road—one day, you're going to have to pick it up and smell it. But don't get me started on Pleasant Ridge. The idea that our county is still operating a money-hemorrhaging nursing home at all is preposterous, and the idea that you, my Democratic Party, have done nothing to get this point across, sickens me.

Yes, Democratic Party, I am very disappointed that these lingering issues haven't been resolved. You used to be the party of action, and the party that defined itself as progressive; now you are the party of inaction, and the party that defines itself as, simply, "not them." Of particular disappointment to me are the Democrats of the Erie County Council, who have missed many opportunities to take the lead on these issues. In fact, when I Googled Councilman Phil Fatica, I came up with "undecided" so many times, I thought his actual name was "Phil Fatica Undecided." See for yourself, below (all headlines and quotes taken from that other newspaper here in town. You know the one. The big one.)

While it's true that Phil Undecided (and the rest of the Democrats on Council) hasn't really done anything bad during his tenure, he hasn't really done anything good, either; sadly, the way things are going here in Erie County, my dear Democratic Party, we really don't have the luxury of being "undecided." We need action and we need it now, not a cut-and-paste quote for the ETN political writers to throw in anytime they need a "Councilman Phil Fatica said he is undecided" quote for their story. Thanks to Mr. Undecided, and the general anti-incumbent, anti-Democrat sentiment blanketing the nation, Mr. Undecided might not be around next term to make any decisions. Or not make them. Whatever.

Then, there's the little issue of your dirty Democratic laundry, which I really wish you would keep in your own back yard. Darlene Kenny ran in the Democratic primary last May against longtime Democratic incumbent Fiore Leone; she got smoked, but thanks to one of the most ridiculous election laws in the United States, she did "win" the Republican primary. So now she gets to face Leone, again, as a Republican, after losing by an almost 2-to-1 margin in a district that is heavily Democratic. Does this sound like a waste of time and money to anybody? Shame on you for allowing this to happen. Elections contested from within your own party both divide your finite resources as well as supply your opponents with free ammunition. If you believe that your incumbent Democrat no longer represents your best interests, consider the following: the Devil you know is always better than the Devil you don't.

Democratic Party, please don't cry. Here's a tissue. There. Better? This is for your own good. I'm doing this because I care about you, and I want you to succeed. Based on your inefficacy, and your inability to keep your own house in order, I'm seriously wondering about our future together. Listen closely, Democratic Party. I don't want to break up with you. But I warn you – if I'm not getting what I need here at home, I may be forced to look elsewhere. This is your last, last chance. Again.