by Cory Vaillancourt
View ProfileFacebookTwitterGoogle+RSS Feed
June 13, 2012 at 5:00 AM 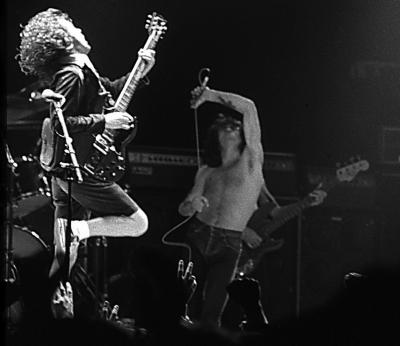 Last week, Erie Reader  music critic Alex Bieler talked about that special moment in life when you go to your first concert. I think it's like seeing the Southern Cross for the first time; he called it "heaven."

I'll agree with Bieler on that, even though his first concert was Barenaked Ladies and Alanis Morissette. Okay, my first concert may have been Material Issue and the Pretenders, but more importantly, no matter who it is you see at that first rock concert, the event is memorable if only for fact that it opens you up to the existence thereof. At that show, I remember coming to the realization that not only did this heavenly, raucous bacchanalia occur frequently, but also that there existed entire structures dedicated solely to housing it.

Those structures become ingrained in our minds as much as the artists who perform in them; indeed, local music venues – from arenas to stadiums to sheds to State Street's taverns – are where memories are created. Friendships. Fisticuffs. First dates with sweet Judy blue eyes. Last dates with Guinnevere. Loud musicians, musing loudly. Drunken debauchers, debauching drunkenly. You – and thousands of your as-yet-unmet temporary best friends – all doing your thing, united in an atmosphere of contentment and peace, or angst and mosh, depending.

Born and raised in Erie, Dan's been playing bass and singing in local bands for more than 20 years. He knows music better than most; during our half-hour conversation, he skillfully tossed around bunched-up handfuls of musical knowledge like women throw their panties at a Barry Manilow show.
Luckily for us, Dan found an outlet for this musical knowledge. One day, he was forced to explain to a disbelieving twentysomething that, yes, as far-fetched as it seems, Erie once played host to musical royalty – royalty like Van Halen, Black Sabbath, KISS, AC/DC with both lead singers, Judas Priest for six days, and Frank Zappa. And, oh yeah, Barry Manilow too.

This week, Dan Schell's self-published book documenting 9 years of rock concerts at the Erie County Fieldhouse, appropriately and accurately titled, "9 Years of Rock: The Story of the Concerts at the Erie County Fieldhouse" is set to be released. The product of three years of exhaustive research, Dan's book focuses mostly on rock 'n' roll shows that took place in the once-great now-warehouse that still stands near the Route 8 exit off I-90.

In his book, Dan's assembled not only a collection of photographs, ticket stubs, print ads, and posters, but also the personal anecdotes of people who attended concerts at the Fieldhouse either as spectator or staff. One of these personal anecdotes leads me to believe that there is a significant chance that somebody out there – perhaps even you, reading this, right now – got punched in the face by Johnny Cash in Erie, Pennsylvania.

Anecdotes aside, Dan's even flung several Manilow panties of musical knowledge into the book, like the fact that AC/DC's first North American performance with current lead singer Brian Johnson – just months after Bon Scott rock 'n' rolled himself to death – was held right here in Erie.
"It was a rock house," said Dan. And what a very, very fine house it was.

In addition to rock 'n' roll, the Fieldhouse hosted many notable superstars outside that genre. For what it's worth, Charlie Pride opened the joint; Merle Haggard, Kris Kristofferson, Loretta Lynn, Ernest Tubb, and Conway Twitty all passed through town, as did the legendary James Brown, who, before one show, refused to take the stage after some last minute "ticketing problems" arose.

The glory days of the Erie County Fieldhouse may be gone forever – it closed in 1983 – but, as they say, don't let the past remind us of what we are not now. If the Erie County Fieldhouse holds memories for you – memories of friendships, fisticuffs, first dates with sweet Judy blue eyes, last dates with Guinnevere, loud musicians musing loudly, and drunken debauchers debauching drunkenly – don't let it bring you down. When Dan Schell's book comes out, buy it, and you can relive those Erie County Fieldhouse memories forever – like the one about how a full two-thirds of the band mentioned in this week's cover story played there – or, you can teach your children well about the times when you used to let your freak flag fly.