Upfront: Stood Up by Crap Rock

There are winners and there are losers. Upfront had a contest winner but got stood up at Celebrate Erie.

by Cory Vaillancourt
View ProfileFacebookTwitterGoogle+RSS Feed
August 24, 2011 at 10:00 AM 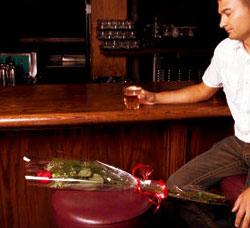 I'd like to thank everyone that participated in last week's "Hyper Links" contest; I received all sorts of interesting emails. In case you missed it, last week's web-only Upfront featured a 500-word article about the now-burgeoning practice of using of hyperlinks in online stories. Each word of my column was hyperlinked to an external website, and I challenged Reader readers to find the one hyperlink that would earn them a prize.

The winner, Jon Glink of Jefferson, Ohio, was gifted six drinks at the Oasis Pub on West Lake Road courtesy of the Upfront Foundation, a shadowy global nonprofit agency dedicated to beer drinkin', ass kickin', good timin', and honky-tonkin', in no particular order. Unsurprisingly, Glink told me "Although it eludes many, the craft of effective procrastination has come easily to me for years," which probably explains why he bested the rest of you. When asked about the article itself, he said, "In the lexicon of human history, no man has accomplished a greater feat than writing this stupid article," which I take as high praise indeed…I think. Congratulations, Jon Glink of Jefferson, Ohio, and may your reign as Upfront King of Internets 2011 King be long and prosperous. All hail Upfront King of Internets 2011 King Jon Glink of Jefferson, Ohio!

To my friends on the Oasis Pub waitstaff, be on the lookout for a vaguely-Ohio lookin' guy wearing a Burger King crown asking about free drinks. I know he'll be difficult to discern from your regular crowd, so be alert. C-Gray, I'm looking in your general direction here.

Speaking of honky tonkin' (and people from out-of-state), I did, as promised, attend Celebrate Erie last weekend; however, my date did not, and I'm trying to figure out why. Let me explain. A woman from Pittsburgh emailed me a while back, disagreeing with my harshly negative opinion on the 2011 Celebrate Erie headliner Kansas. We then engaged in an email exchange I thought I'd share with you. To protect her identity, I'll call her Bertha Sugaree, or BS for short. Get it? Anyway…

BS: I have never voiced my opinion to the editor nor responded to an article. But the UPFRONT article by you dissing Erie and Kansas deserves a reply. I am an old woman, I guess, at 44, and I enjoy all the bands you call "crap rockers."

CV: A 44-year old woman reads the Erie Reader, and Upfront? You're not in our demographic or distribution footprint at all, mainly because you appear to have disposable income. And, I wasn't dissing Erie; in fact, we love Erie. However, as our friend Matt from U Frame It framing (duh) famously said at the 2011 Erie Blues and Jazz Festival (note to self: do not abbreviate as "BJ Fest" on kitchen whiteboard), "C.R.A.P. rock stands for 'Classic Rockers After Peak.'"

BS: Let me tell you, I have been to several of these concerts and they still rock, some after 40 years in the business! I have even traveled from my home in Pittsburgh to Erie to see Styx. These bands have loyal fans and always pack the house. We are never disappointed with the energy or nostalgia that they bring to us.

CV: While I am most assuredly down with Mr. Roboto, (DOMO! domo.) I have to ask, do you realize that there are a bunch of local acts to see at this festival? Vital, relevant, exploring, evolving, experimenting…you into that at all? Ever seen Eric Brewer? How about Is What It Is with a whole mess of belly dancers? Mambo (now featuring 88 more keys, both black and white)? Instead you're going to see someone play the same songs they've been playing for 40 years…

BS: Yes, they may be getting up in years, but let's face it, how many "artists" of today will be around and performing in the next five years, let alone pack a venue in 40 years?!

CV: I don't know, but I'm sure you'll be wearing their patch on your denim jacket, gracefully draped over your yellow mesh t-shirt that so succinctly offsets your teal stretch-pants. May I suggest adorning your dainty hooves with combat boots to accentuate this humble attire?

BS: Also, we love Erie. It's no "mistake on the lake," as you refer to it. It is a beautiful town with plenty of history and attractions. It has been and will continue to be our favorite vacation spot.

CV: I was being facetious; everyone knows Pittsburgh is the mistake on the lake. But thank you for disposing of your disposable income up here on a regular basis. We're happy to be your money dumpster. Say, can I interest you in a nursing home, perhaps? How about an American Impressionist masterpiece? Cheap? I'll make you a good deal. How about a slightly used statue of Oliver Hazard Perry? You are down with OHP, aren't you?

BS: I was disappointed in your article announcing Kansas as the headliner for the festival. And I plan on being there rockin' with the old guys.

CV: Thanks! I was disappointed too. Let me know when you come up for the show and I'll even buy you a beer and one of Todd Scalise's sweet-ass "wayward sons" tee shirts just to prove that there are no hard feelings between us. And you simply must see that painting I was talking about. Bring your checkbook.

Needless to say, I never heard from Bertha again. I fear I may have scared her off; so, to be fair I tried to replace the economic and environmental impact her presence would have had by eating six corndogs, buying three Bud Light Tall boys, drinking them, throwing the empty cans on the Erie Club lawn, and then passing out in the lobby of the Avalon Hotel. Thanks, open container!

What did YOU think about this year's Celebrate Erie? Highlights? Lowlights? Do you think "honky-tonkin'" has racial connotations? Do you think "honky-tonkin'" should ever be used as a verb outside of a county music song? Should I start writing my "I can't believe we sold the Hassam" piece yet? PS- anyone wearing a denim jacket with a Kansas patch, yellow mesh tee, teal stretch pants, and combat boots to Celebrate Erie gets a free beer at the Erie Reader tent next year. Just ask for the Upfront Foundation.