Erie is going to be having a bit of a roots moment when Americana/bluegrass/folk trio Urban Pioneers makes its way back into town. 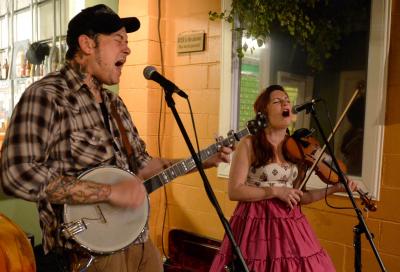 Jared McGovern (banjo) and Liz Sloan (violin) will team together again for a night of footstompinu2019 roots music at Scottyu2019s Martini Lounge.

Erie is going to be having a bit of a roots moment when Americana/bluegrass/folk trio Urban Pioneers makes its way back into town. Local favorites Bootlegger's Bible Club will open, making for a string-filled extravaganza at Scotty's Martini Lounge.

Urban Pioneers consists of Liz Sloan on violin, Jared McGovern on banjo and Martin Sargent on upright bass; each of the three hail from either Texas or Tennessee. "Matt Boland has been working with them, probably since the Crooked i days. [He] has brought them into town before," Matt Texter, lead vocals, harmonica player and guitarist for Bootlegger's said, referencing his band's upright bass player and co-vocalist (Louis Nicola rounds out the group, on fiddle, diddley bow and resonator guitar). "We've been lucky enough to open for them before. They're so good, and they're amazing people."

The 21-and-over show will celebrate not only this city's appreciation for the musical genre, but also the release of Urban Pioneers' latest (and fourth) album, Hillbilly Swing. This is music that was made for dancing, and showgoers should certainly come to equipped with some sturdy stompin' shoes.

Dancing has a way of forging connections, whether it's to an awareness of our own body or to the body dancing next to us, and Texter thinks the music his band and Urban Pioneers produce creates a connection of its own. "Banjo and fiddle connect us to something we've lost touch with...the dirt. Life is in the dirt. Anymore, feelings are manufactured. We're made to feel by notifications and clicks. But it's the vibration of strings that wakes us up." — Cara Suppa

by Symoné Crockett4/16/2020, 5:10 PM
Symoné Crockett dives into the lovable and twisted mind of one of Erie's most memorable music educators