Steve Buscemi and Gilbert Gottfried, sex idols? Maybe not, but they both star in a pair of 50 Shades of Grey videos. 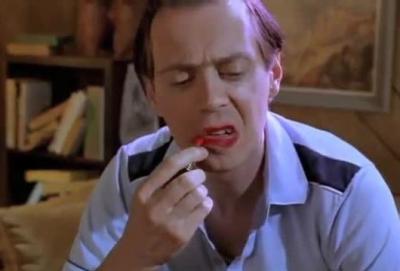 Photo of Steve Buscemi in Billy Madison via YouTube

Buscemi turns on the heat as businessman Christian Grey is Boo Ya Pictures' 50 Shades of Buscemi (NSFW warning for language and Buscemi-based partial nudity) a fake YouTube trailer that is exactly what it sounds like. Buscemi isn't exactly a model of male beauty (although some people who claim that he used to be a "mega babe"), there is something oddly alluring about the way Buscemi says "You can bet your keester I'm going to get a piece of that pie." It really makes you think that the producers of 50 Shades of Grey dropped the ball when they cast Jamie Dornan as Grey in the actual movie.

Of course, there are always going to be some people who prefer the book to the screen adaptation. If you're such a person, perhaps Gottfried's reading of 50 Shades of Grey may entice you. The screechy voice actor and recent visitor to Jr's Last Laugh teamed up with College Humor to provide some extra power behind a few choice sections of E. L. James' novel. There are some particularly squirm-inducing lines - I never thought that I'd hear the voice of Iago from Aladdin read aloud about fisting - so I'd stay away if you're prone to visualizing things. Unless you've always wanted to imaging Gottfried and Buscemi in the buff, which means that this is your lucky day! Check out both videos if you're feeling in the mood.