Michael Scott hosted his last Dundees Ever in last night's episode. Kristen Rajczak recaps the episode in this web-exclusive. 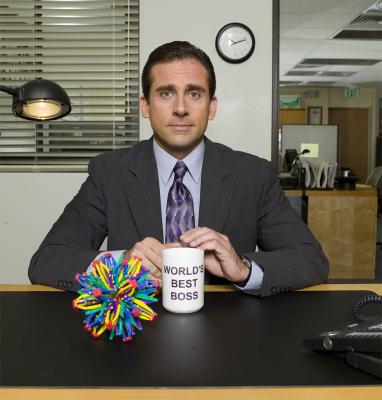 No matter how many laugh-out-loud moments there were in last night's episode of "The Office"—and there were quite a few—it's only going to be remembered for one scene: a rewritten version of "Seasons of Love" honoring Michael's time at Dunder Mifflin.

Complete with Will Ferrell singing a hilarious, solo riff in falsetto, the "Seasons of Michael Scott" was surprisingly on-key, both musically and emotionally. For so long, it felt like Michael was nuisance. Now that he's leaving, it seems like everyone from Creed to Stanley will actually miss him. (And so will I!)

The song was part of Michael's last Dundie Awards, the "Golden Globes but less mean." (Could that have been a stab at Ricky Gervais' recent Globes barbs? Considering Toby won the Dundie for extreme repulsiveness, I would say Michael's assessment isn't entirely true.) He and Deangelo started the day of the Dundies by hand-delivering nominations to people's houses at 6 a.m. They were threatened by Stanley who hasn't looked that mad since he thought Ryan was hitting on his daughter on take your daughter to work day. They also caught Meredith's morning "walk of shame." Did anyone else think her house looked like something out of "Hoaders?" I wouldn't take a Vienna sausage breakfast from her either.

As the day goes on, Deangelo reveals that he does not like to perform. His co-hosting efforts look like they're going to be dismal at best as he can't add the "tat" to Michael's bantering "rat-tat-tat." He's not the only one to admit something he doesn't like. Pam and Jim find Erin eating lunch in the car to get away from Gabe. Turns out, she doesn't like spending time with him at all but doesn't think she can be mean enough to break up with him. We've all been there, sister. Pam encourages her to come clean.

It's safe to say that the Dundies are pretty much a disaster. Deangelo runs off stage as soon as he's introduced to vomit in the bathroom. Michael finds him there and the two have a truly Ferrell moment slapping each other in the stall. Scenes like that make me wish both Michael and Deangelo would stay on the show, just because they are so ridiculous together!

As expected, Deangelo misses many of his lines and has no comic timing to speak of while on stage. Pam gets miffed that Meredith wins the Best Mom Dundie (who wouldn't be after seeing her garbage-strewn yard?) and Erin decided the best way to break up with Gabe is in front of everyone while speaking into a microphone. It was a cold move, but I can't hate as this leaves her open to date Andy (and her dress was so cute).

In a nod to "The King's Speech," Deangelo wears headphones blasting music to help him deliver his Dundies acceptance speech. Since he's basically screaming, the manager throws them out of the restaurant. That's when Pam asks if Michael wants to continue the awards back at the office. He's amazed anyone wants to, as he should be considering for six seasons, his employees have used every excuse possible to get out of spending time with him.

When they are all back in the conference room, he then realizes they had the special song planned for him.

Michael, your leaving is going to hurt us, too.