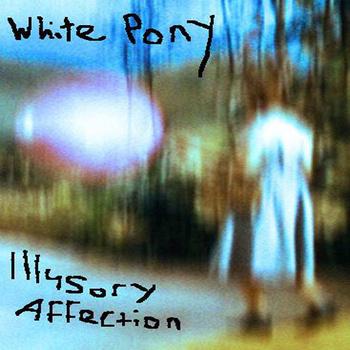 Any passionate musician is bound to get caught up in gear talk at one point or another. Instruments and equipment play a huge role in the process of music composition in every genre. And unfortunately,  many musicians are plagued by consumer culture and fall under the misconception that to get the "best" sound, you need the "best" equipment.

Some, on the other hand, are able to acknowledge that the most crucial tool in regards to musical creativity isn't something you find at your local music store. After all, our ears channel into our brains and that's where music goes when we listen to it. So it only makes sense that that's where it comes from as well. The Rickenbacker guitar and 100 watt tube amp you spent five grand on to have sit your basement because your neighbors will get pissed if you use them past 9 p.m. are essentially worthless if you don't recognize what your most important piece of equipment really is.

White Pony, a lo-fi band based out of Albion that just debuted their first release – a full-length record titled Illusory Affection – makes this understanding clear with their exceptionally raw sound. Taking influences ranging from bands like Slowdive to Nirvana, this album brings revival to the entire spectrum of 90's indie music.

Having started out as a solo project by Alex Wilson, the three month writing/recording process eventually led to the addition of Jess Klemm on bass and Calvin Brown on drums. As with any DIY recording project there are bound to be some setbacks. A lot of times, however, those difficulties play a big role in shaping the sound of the finished product. "Three drum sets were used on Illusory Affection. One of them broke, and then the second one was not available at times, and the third was borrowed from a friend to finish the album," Alex told me when I asked him about the endeavor. "I was given a cheap, broken, Fender-knockoff for free. When I plugged it in, the tone was very crackily and muddy; it had an aggressive dream-like quality to it. So, I decided to use it on the recordings, and I still plan to use the same guitar live."

The resulting twelve-track album rips from beginning to end. Songs like "Gloom" and "Absorb" blend fuzzy guitar riffs with pleasant vocal melodies reminiscent of early shoegaze bands like MBV and Ride. Whereas a song like "Father's Day" is so hard that it'll make you want to run full speed thrashing into a crowd of people. All these songs and sounds somehow come together to create a distinct and consecutive style that makes for some of the best tunes to come out of the Erie area in a while.

The closing song, "Servitude", is my favorite track on the whole release. Honestly, this song would fit perfectly on In Utero between "Pennyroyal Tea" and "Radio Friendly Unit Shifter" and you wouldn't even be able to tell that it's a different band other than from the recording quality. Critically, you could say it lacks originality in that in sounds exactly like Nirvana, but then again, how many bands can you actually say sound like Nirvana?

White Pony plans to put out another release by the end of the year and is currently lining up shows in the Erie area, so if you need a band to fill the bill, book these guys! Also, go download Illusory Affection on bandcamp for free.