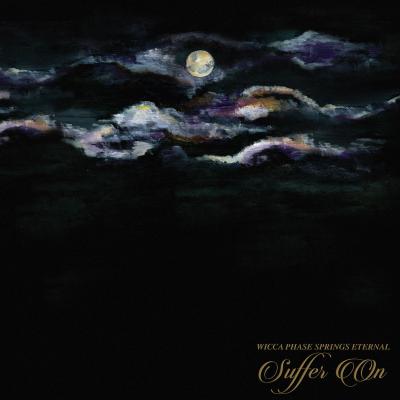 "Don't call yourself an emotional rapper! This isn't going to last," Adam Mcllwee warned in a tweet before soon clarifying his thoughts. "Obviously emotional rapping is going to exist, but the 'emo rap' genre that people are referring to is a trend," he continued. The ex-Tigers Jaw guitarist and vocalist — and current Wicca Phase Springs Eternal rapper — is well within his rights to speak on the genre as a member of Goth Boi Clique and frequent collaborator with the late Lil Peep. On his Run For Cover Records debut, Suffer On, Mcllwee draws a throughline from his emo beginnings to his hip-hop ambitions. Suffer On is nothing if not focused and cohesive. Mcllwee is careful to not dive headfirst into any particular territory, instead dipping his toes into several pools at once; opening track "Together" sets the tone with a metronome-like beat playing over frantic acoustic guitars. Mcllwee's baritone is a strange fit anytime he goes for a flow, but with many of the tracks being sung, he sounds comfortable here (not far from his performance in Tigers Jaw). Still, there are some growing pains in Mcllwee's songwriting and delivery that the artist is likely to sort out soon if he continues to create at this pace.
— Aaron Mook