Gov. Wolf laid out a bold agenda. Will the legislature follow the bold lead? 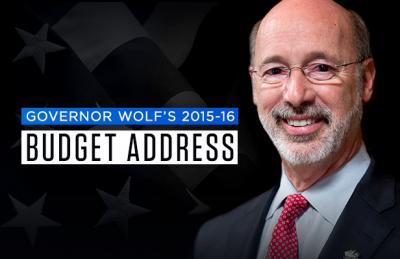 On Tuesday, Pa. Gov. Tom Wolf laid out one of the most bold budget proposals in the history of the Commonwealth. It included Republican-style tax reform as well as tax and spend proposals for education and an increase in the personal income tax; it included property tax reform and an increase in the minimum wage; and it included changes to healthcare as well as an extraction tax on oil and natural gas. The next few months are going to be a wild ride in the General Assembly.

"Although the 2015-16 budget is a work in progress, it has elements both Republicans and Democrats can embrace," said State Rep. Ryan Bizzarro in a press release Tuesday afternoon.

Bizzarro is correct and Wolf pointed out that many of his initiatives were drawn from Republican agenda items during last legislative session as well as the current cycle. But if the national political climate is any barometer on what's going to take place in Harrisburg as the governor engages the Republican-led legislature, its going to be an uphill battle – Republican ideas incorporated or not.

"Walking through the halls today, I'm starting to hear the rhetoric that's being placed on tax and spend and that's simply not true," says State Sen. Sean Wiley. "We have to do something different than what's been done before and the Governor laid out a proposal today that is very bold. But again, it satisfies some of the challenges that we've been facing in recent years."

The biggest challenge in recent years has been the assault on public education levied by the Corbett administration. More than 25,000 educators were laid off as school districts consolidated classrooms and buildings in an attempt to leverage local resources to offset the loss of state funding and federal stimulus dollars.

Gov. Wolf ran on a platform to restore $1 Billion in funding to public education at the K-12 level, but on Tuesday he also proposed restoring fifty percent of the funding cuts to the PASSHE institutions in exchange for tuition freezes at Pa. colleges and universities in addition to an unprecedented $120 million for early childhood education. Part of this education plan introduces a new funding model for public schools based on population, economic need, and responsible control of local resources.

"I introduced a bill on Monday to address the formula used for cyber charter schools," says Wiley. "That's going to make a significant difference, not necessarily for the money that's going into the public education fund, but it's going to address the costs incurred by the individual school districts across the state."

Pennsylvania has fallen behind some of the worst states for educational attainment in the entire country when it comes to benchmarks and funding. Providing financial support to local school districts and holding them accountable for the funds they receive is just the first step in a long process of reconciliation with the youth of the Commonwealth.

But the Gov.'s budget address wasn't all jeers. In case you missed it, the Gov. also mentioned Erie as one of the Commonwealth's "world-class" ports. This has particular significance because the Port of Erie would fall within a proposed City Revitalization and Improvement Zone (CRIZ).

You'll recall that Erie failed to meet the CRIZ standards in the initial round of CRIZ awards in 2013 because it hadn't created its own CRIZ authority. I case you're wondering, it still hasn't created a CRIZ authority, but a recently introduced bill by Sen. Wiley would allow the city to use an existing authority to administer its CRIZ plan, a plan which includes the construction of Scott Enterprises $150 million Harbor Place project surrounding the Blasco Library and Maritime Museum.

"This is another opportunity to offer incentives for the private sector to increase commerce and to create jobs across the state," said Sen. Wiley. "We have a $150 million project just waiting to see how this is going to go down and we have bipartisan support for this bill in the Senate and we're working on the House right now. If we can get this moved up to this year, Erie has a shovel ready project that's ready to go, that's going to make a significant impact on downtown Erie."

The governor's budget address was, indeed, bold, visionary, and creative. But as we've heard so frequently, the political will of the General Assembly needs to be on his side in order for these proposals to become reality.

Wolf has proposed a minimum wage of $10.10 per hour, education for three and four year olds, an extraction tax on oil and gas drilling, and some serious changes to the personal and property tax codes. He's also offered the legislature a balanced budget even though he started $2.3 Billion in the hole.