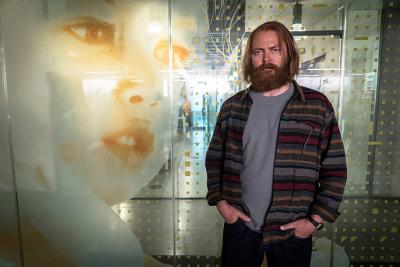 If you haven't seen Ex Machina, do yourself a favor and do that now. If you liked that movie at all, get ready to queue up the FX miniseries Devs.

Written and directed by Alex Garland, Ex Machina was one of my personal favorite movies of the last decade. It was a dense and efficient three-hander, taking place in mostly one location. Among its many other awards, it was nominated for Best Original Screenplay (losing to Spotlight), and won for Best Visual Effects.

Beyond its accolades, it hinted at something deeper. An unfathomably rich tech genius with bad social skills flies too close to the sun of a technological singularity.

That last assessment is totally interchangeable with the plot of Devs. Though instead of Oscar Isaac, we have none other than Nick Offerman, as the surname-less Forest. Known to millions as Ron Swanson from Parks and Recreation, Offerman uses the other side of his deadpan expertise to show a darker side, with miles of in-character subtext lying behind his piercing eyes.

While Forest is the architect behind the series' captivating technology, he's rightfully second-billed.

Though the pilot episode puts the audience in the shoes of Russian programmer Sergei (Karl Glusman), the series quickly pivots to his girlfriend, Lily Chan, played by Sonoya Mizuno. This is the third collaboration with Garland for Mizuno (including Ex Machina), and her biggest role yet.

As Sergei is led into the secluded office space, he literally floats along a golden path supported by electromagnetic fields across an unbroken vacuum seal in order to get to the central unit of machinery. The entire workspace is covered in gold in order to serve as a good conductor. The show's explanation for the lab's captivating look is flimsy, but the striking visuals sell it as a truly magical place.

After Sergei is killed, the remainder of the season finds Chan unraveling the mystery of Sergei's death.

This is where the show falters somewhat. The cat-and-mouse game played by Kenton and Chan reminded me most of Kate Mara and Michael Kelly's plotline in the first season of House of Cards. Worse: Not unlike that arc, it's ultimately a red herring.

There's an undeniable beauty during the scenes where the technology is being explained. That is where Devs shines. The reverence for the work is unmistakable.

Even before the tech is fully explained, it reads as a transcendental, religious experience. The workplace is a golden sanctum set amidst nature.

Like the Spring Temple Buddha in China or Christ the Redeemer in Brazil, the San Fransisco of Devs boasts a giant statue of a small girl. Though carrying a menacing symbolism one might find on the Island of Lost, it becomes clear that the statue is of Forest's daughter, the namesake for the fictional company Amaya.

Ultimately, the series ends with an Easter egg connecting it to Ex Machina. Forest confesses that "Devs" is a play on the word "Deus," substituting the "v" for a "u." Together, the series and the movie are literally Deus Ex Machina, a widely-known literary trope, translated as "God from the machine." — Nick Warren