You Ought to Know: Sean Whaling

Alex Bieler calls Sean Whaling a "jack of all trades." You will too, once you read this. 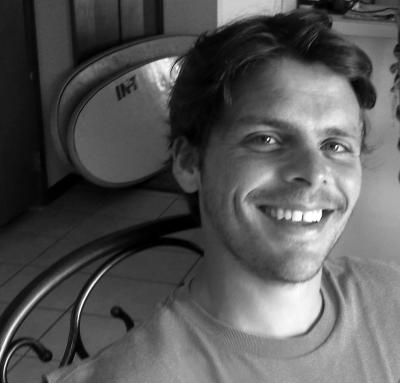 With the rise of stars like James Franco and Joseph Gordon-Levitt, the idea of finding success as a multi-faceted entertainer seems even more alluring than it did before. Instead of being a "jack of all trades, master of none," the various actors, musicians, and artists are showing that you can star in a movie, play a sold-out show at Madison Square Garden, start your own line of coffee, and direct a music video for R.E.M. within a short period of time.

From the A-list actors down to the over-eager high-school entertainer, the urge to entertain eventually comes out of these busy types.

Sean definitely qualifies as a jack of all trades. A quick glance at his resume shows titles of cemetery groundskeeper, package handler, and laborer/mason tender. But beyond the blue-collar careers lies a string of "hobbies with potential," as Sean calls them, part of a passion for performing that started at an early age.

"I started doing talent shows when I was a young kid, probably around fourth or fifth grade," Sean says, the words parting quickly from his lips, part of a softly-spoken excitement that exudes from the artist. "I would run up and read jokes out of 'Reader's Digest' and stuff, dress up like Ace Ventura."

After discovering the joys of entertaining others, Sean continued to dabble with creative projects. Upon graduating from Mercyhurst University with a degree in fine arts and studio painting, Sean has had his hand in everything from oil painting and teaching to water sports and stand-up comedy, even creating Chromatic Tone Studios with partner Jason Forrest. While that may seem like plenty of areas for any busy person to focus on, Sean is the type to keep trying out more activities just to show that he can succeed at it.

"It's almost like a challenge," Sean says. "Actually, the reason I got into comedy was because somebody signed me up. Basically, that was a challenge right from the start. I knew that I could handle comedy, but as soon as I started writing jokes, it became more of a challenge. I didn't have a 'Reader's Digest' to steal jokes from like I used to."

It comes as no surprise that the man who's willing to entertain a crowd on short notice is a people person. Just from talking to Sean, you can see he loves meeting new people, the type of person that will converse with anything having a pulse, just because he loves making a connection.

While the artist/musician/[insert title here] always enjoys the hustle and bustle of the city, you can sense that there's a peacefulness behind this busy soul. In fact, Sean's youth unveiled more than just his passion for entertainment.

"I do have a quiet side too where I'm not crazy, psycho-man and entertaining," he says." I like to be quiet and solemn."

At the age of 13, Sean took a trip to Alaska that ended up impacting how he looks at everything, from the effects it had on his paintings to how he calms down when the stress begins to mount.

"It may surprise some people that know me, but I still go deer hunting with my dad," he says, revealing a side to him that, at first glance, seems to clash with his bustling city-life persona. "I like the quiet part of the woods and being away from it all. It's like therapy being out there in solitude, like in Alaska, so quiet and surrounded by nature. That's always somewhere I want to go back to because I know how peaceful it is, but even around here, you have the Pennsylvania mountains not too far away. It's good to be able to know where to go if you have to do that. I don't mind being so crazy and entertaining because I know I can just escape and calm down. All of that has shown through my art and made me who I am, because I understand nature. I grew up in the country and have been living in the city for years too, so I have a good balance."

It's this balance that helps Sean with the balancing act of all of his activities. While he admits that most of his "hobbies" aren't making him a lot of money at the moment, he knows that his talents will eventually get him somewhere.

"I'm not willing to give up on anything because I know every once in a while something good comes out of it," Sean says, as he leans forward in his chair with a glimmer in his eye. "That's why people shouldn't give up on what they want to do. Even though I make money other places [doing odd jobs], it's still a passion of mine to keep the passion going. I'm going to continue finding my niche somewhere, wherever that is."

Eventually, that desire to create might take him out of Erie. As someone that loves the busy city life in addition to his quiet nature retreats, Sean says that he will eventually strike out for Los Angeles or New York City to try and make it there, hopefully bringing back his newfound fortune back to the Flagship City. Yes, the trip to the big city can be daunting, but Sean will be ready.

"In this time in our lives and with the way the world is, it's hard to make your mark," he says. "If challenges keep coming to me, I'm going to keep taking them."

As for now, you can see both him and his work around town. You might have missed his last set at Jr.'s Last Laugh, but you can still see him perform there at 6:30 and 9:30 p.m. Saturday, Feb. 23 or commission a painting from Erie's own jack of all trades.