Local singer-songwriter Zack Orr will play a new song every day for a year to commemorate his 25th year as a musician.

by Alex Bieler
View ProfileFacebookTwitterInstagramGoogle+RSS Feed
May 12, 2015 at 9:05 AM 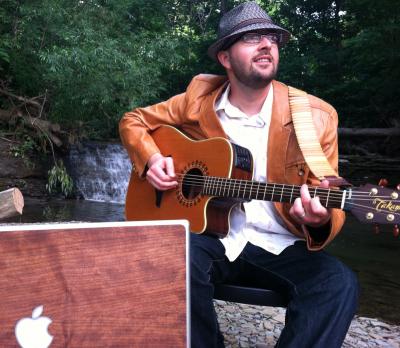 It takes a lot of dedication to do a daily project for a whole year, whether that entails keeping a diary or taking selfies for 365 straight days. Singer-songwriter Zack Orr is currently going through his own year-long project, although it's a bit more notable than just having to smile at the camera.

Orr is currently going through a project he calls 365 Days of Song, where he plays and records a different song each day for - you guessed it - 365 days. The Erie-based artist, who was nominated for Best Concept Album by the Independent Music Awards for his album Francisco the Man, started 365 Days of Song to commemorate his 25th year of playing guitar and writing music and has already been knocking out top-notch performances for a month now, offering up some original tunes and covering the likes of Paul Simon, Pavement, and Pearl Jam. In fact, cover subject Joe Henry has already given his approval to Orr's take on his song "I Was a Playboy."

The project started April 7th, when Orr noticed an announcement about the live-streaming iOS app Periscope. While he started off with a single viewer, it wasn't long before his project began to attract more and more people with his impressive takes on beloved tracks and intriguing originals.

Of course, being a creative guy and all, Orr wants to take this project to even bigger places than simply live streaming and YouTube videos. That's why the man who caused former Rolling Stone Editor Ben Fong-Torres to call his work "stunning and inventive" started a Patreon page to help fund his ongoing project.

Potential goals include a video shoot and songs played in special locations, such as Orr taking on LCD Soundsystem's "New York I Love You But You're Bringing Me Down" with the Manhattan skyline behind him. I strongly support this, because both Orr and that song are awesome. Maybe he can even involve Kermit the Frog in the video, because that would also be awesome. Hell, if the Patreon raises enough money, Orr will even get a tattoo of the nuber 365 in case you were questioning that whole "dedication to the project" thing. Also, Orr won't be alone for the project, as fellow local musicians Ian Maciak and Chris Freeman stopped in the studio to help out on original track "Machines" and other collaborations are sure to pop up from time to time.

When the 365 Days of Song comes to an end, Orr plans on putting out an album with specially-chosen tracks from the project. Patreon supporters will be able to voice their support for a Song of the Week, leading to a list of 52 tracks that will be whittled down to a final 12 by a fan vote. The winners will then be re-recorded and released as an album, with mp3 downloads and, depending on your support, limited edition hand-lathed vinyl versions of the compilation being given out to people who donated to the project on Patreon.

Orr has already provided a month's worth of pretty stellar performances, so go check out 365 Days of Song on Periscope and YouTube, and give his Patreon page a read to check out all of the details and, y'know, donate. You can also follow the project on Twitter if you're a fan of your song updates coming in 140 characters or less.