The event is a celebration honoring the many caretakers who help those suffering from Alzheimer?s. 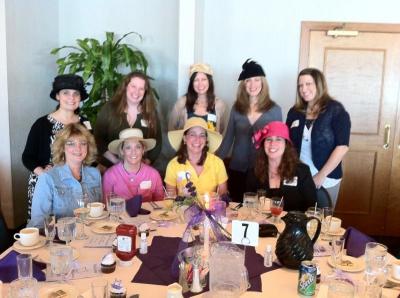 In another life, I used to play in an (almost) all girl band known as The Killerinas – a hybrid of killers and ballerinas – punk meets delicate beauty. The music was original and the fashion was impeccably fun. Although I am no longer part, the other women in the group are still out there, still performing and still making inroads into a scene that on some level is still predominantly male-oriented.

And although that is a feat itself, all these women are also very active members of our community. In particular, one of them is also on a personal mission not only as an educator (she is an assistant principal in the city school district) but also as an active advocate in the fight against Alzheimer's disease.

Which brings us About Town.

Gina Rullo, alongside her husband John Johnston, is chairing the 6th annual "Women's Hat Brunch." The event is a celebration honoring the many caretakers who help those suffering from Alzheimer's. According to Rullo, "We are really concentrating on the awareness of this disease. This year, the event is being put on by a volunteer group of men and women with some administrative support from the Association." As with most non-profits, the Association is limited with its resources and has instead opted to focus its energy on the annual walk, which is a large undertaking on its own. "We felt this event needed to continue on. It's a very special to many of us that have gone over the years," Rullo added.

As for Rullo's personal connection? "My grandmother suffered for eight years with the disease." Theresa DeStefano was not only an active woman in her community, she also raised nine children and every family gathering would boast anywhere from 50-100 people at a time. "She was the closest person in the world to me. It broke my heart the day she no longer knew who I was." She ultimately lost her battle on Christmas Day 2009.

This year, the event's keynote speaker is John Lyons, local filmmaker extraordinaire. He also has a close connection to the disease: his father. "My father was an outdoorsman and very into sports. When he developed Alzheimer's, it was very painful to watch someone so energetic go through such a change and see his frustration in losing his freedom over time." John's father died in 2008, however, John had started creating a film – "Schism" – a story of one man's descent into Alzheimer's dementia - in 2006. "My father was very open with me; he would explain things to me as he was going through them—I wanted make the movie as realistic as possible."

He also believes this event is invaluable. "As someone that's seen the effects of this disease first hand, I have a lot of appreciation for the work these caretakers put in; they deserve as much recognition as possible. "

In addition, the brunch will also feature a silent auction, which will showcase great works by talented, local artists -- Fran Schanz, Art Becker, and Lena Logvina -- to name a few. Each guest will also receive a print of a painted purple flower that was created by someone suffering from the disease. Flowers can also be purchased in the memory of a loved one.

As defined, Alzheimer's disease is an irreversible, progressive brain disease that slowly destroys memory and thinking skills, and eventually the ability to carry out the simplest tasks. And the statistics on the disease are staggering. According to the National Institute of Health, one in eight – 5.4 million Americans – suffer with the disease. More than 15 million Americans provide unpaid care valued at $210 billion for persons with Alzheimer's and other dementias and it is the sixth leading cause of death in the United States.

There currently is no cure.

The 6th annual Women's Hat Brunch will be held this Saturday, April 21 at the Erie Yacht Club. The event begins at 11 a.m. and tickets are $50 per person. Contact Robin Hecker for more information at 456.9200 or robin.hecker@alz.org.