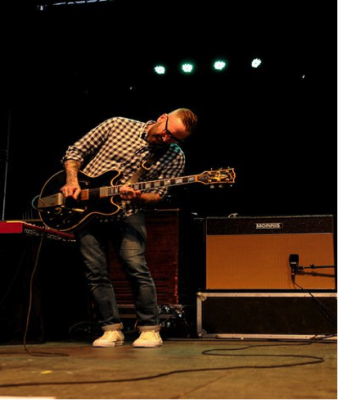 City and Colour has just released its fourth studio album, titled "The Hurry and the Harm." If you don't know, City and Colour is the solo-act of the Canadian musician Dallas Green.

The title of the act comes from Dallas being a "City" and green being a "Colour."

Boom. City and Colour. Simple as that.

Here's some "Need-To-Know Info" about Green and about the album.

Green was the former singer and guitarist of the hardcore punk band Alexisonfire. This band achieved critical acclaim in Canada. Of their four albums, two were Canadian-certified Platinum and two were certified Gold. Listen here for an example of that hardcore-punk sound I'm referring to.

Not necessarily a sound that appeals to everyone, but I've always enjoyed their work. Obviously, the people of Canada did, as well.

The one thing that stands out in that song, and in all of Alexisonfire's songs, is Green's singing. For fans of a more easy listening genre of music, here is an older City and Colour song.

Green is now releasing his first City and Colour album in which he is not also a member of the broken-up Alexisonfire. Like Alexisonfire, City and Colour has achieved critical acclaim in Canada. In fact, all of his previous albums are Certified Platinum, and there is every indication that "The Hurry and the Harm" will also achieve this recognition.

"My Take" is that this is an excellent album. I was a pretty big fan of Alexisonfire, so initially listening to City and Colour seemed pretty natural for me. However, I have to admit I was caught a little off guard by this album.

Dallas Green is now a folk artist. It may be hard to wrap your head around how he can be a folk artist with his sort of high-pitched, emo-like voice. He makes it work because he is able to create a folk-like acoustic atmosphere as if you were listening to Mumford & Sons or Frank Turner, one of Erie Reader's favorites.

Sonically, the acoustic-folk sound forces the listener to say, "Oh, what a nice voice" rather than "This is too emo for me, and I thought emo music died, like, six years ago." If you can't get past the fact that the singer may not have an incredibly masculine voice, you may want to just stop reading now and move on to a different album. For most thought, I don't think it should be an issue, since the music itself is so good.

Lyrically, "The Hurry and the Harm" truly is an honest album. A lot of musicians these days say that they set out to make an "honest" record. When they say this, I wonder what kind of records they had been previously making. Shouldn't any piece of music be honest, or is everyone just spewing bullshit into our ears?

Green combines thoughts about leaving his former band and finding his own path, simple life lessons, and relatable pains. With the first lyrics of the album being "Everyone wants everything, no matter the cost," listeners can get the sense that Green has set out to make a truly meaningful album. Right from the get-go, this album forces you to carefully listen to every lyric that comes from this unique voice.

The key songs that I'd recommend are: "The Hurry and the Harm", "Of Space and Time", "Paradise", "Thirst", and "Death's Song." It's a good enough album to enjoy every song, but these songs are what really appealed to me either musically or lyrically.

In City and Colour's first release since leaving Alexisonfire, Green delivers in a fantastic way. I'd give "The Hurry and the Harm" four out of five stars.