At the Center of the World

by Nick Warren
View ProfileTwitterInstagramRSS Feed
November 21, 2018 at 10:15 AM 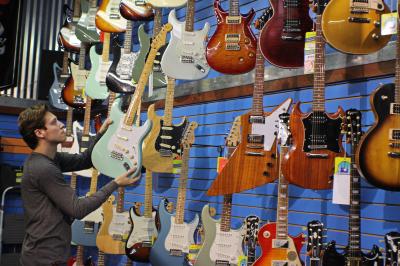 Nick Warren
World of Music sales associate (and singer and guitarist for pop-punk band Daytona 2000) Trevor Vogt grabs a Fender Stratocaster off the wall for a customer.

There have been a few places claiming to be the "center of the world": a roadside pyramid in Felicity, Calif.; a spot in the southwest Atlantic Ocean (per some map projections); Çorum, Turkey (according to Google Maps); the inside of the Earth's core (if you insist on being literal about things); or an unincorporated township near Warren, Ohio. For the music community in Erie, the answer to that is clear: the showroom floor of World of Music.

Like any center, there's a force of gravity at work here.

For decades, musicians have been flocking to this store. One step inside World of Music (or WOM, as it's known), and it's pretty obvious why it's such a hub — especially if you fancy yourself as a guitarist. With its walls lined with scores of guitars from electric guitar-makers like Fender, Gibson, Ibanez, and and acoustic manufacturers like Taylor or Martin, it's almost overwhelming. It's not limited to guitars of course, with PAs and percussion to the north, and keyboards, strings, brass, and woodwinds to the south.

Founded by local jazz saxophonist Dick Bulling in 1954, it was passed on to his daughters Laura Jacoboski and Linda McLaughlin, who later brought on her husband Mike as a partner. Mike and Linda's daughter, Amanda has worked at the store for years, too. In addition to being a true family business, it's been a part of nearly every local musician's journey as well. There are countless people who bought their first instrument or honed their early skills in one of the store's many downstairs lesson rooms. Via staff alone, the store has pulled in some of the best musicians that this region has ever seen, and almost unanimously, they're happy there. "We've had a great crew for years" explains store manager Rome Caccamo. "What sets us apart is the fact that we know our longtime customers by name, and they know us. The vibe and culture in our store one of familiarity, and you know you'll see many of the same salespeople here because our employee turnover is so low."

As everyone knows, there's a fine line when you're shopping. Sometimes you are looking for something directly, and sometimes you just want to browse. For gear junkies, it's usually the latter. Sure, for most stops, one can find a reasonable excuse: a pack of strings, a pair of drumsticks, or a replacement cable. But while you're checking in, you simply must check to see if they have any other items you might be interested in. Oftentimes, music store employees are drawn as condescending elitists or self-involved basket cases (check out Karen Kilgariff's "Chelsea Guitars" and the opening scene in Mike Judge's Extract for respective examples). As someone who often meanderingly browses, I'm always eased by the staff's easygoing approach, whether I know them or not.

At this time, it's probably helpful if things get a little personal. I suffer from a mild-to-moderate gear addiction, known to message board frequenters as Gear Acquisition Syndrome (or GAS). I currently own about a dozen instruments, half of which are electric guitars (in the Fender Jazzmaster or Jaguar "offset" style), with more than a dozen effects pedals, a few amplifiers cabinets — one of which is so prized (and cumbersome) that I've never played it out live. I've bought and sold more than double that over the past couple of years, and despite what it does to my bank account, I love it. As mentioned earlier, many people got their first guitar at WOM, and I'm one of them. It was a red Yamaha RGX 120 D. A few years later I bought my first effects pedal there, which — at the behest of one of the associates who urged me to get the much-better and equally-priced Boss OD-3 — was a DOD Supra Distortion. Some of my friends had the "Grunge" pedal, and I wanted to follow suit.

Oh, what lessons we grow to learn throughout the years.

"In terms of teaching, I'd say that we have one of the best teaching staffs of any store that I've ever worked at," confessed Zack Orr. Starting at the store in the late 1990s, Orr went on to the Berklee College of and later returned to teach at WOM in addition to his many freelance audio and visual ventures. "There are people who are graduates from all the local music schools, and self-taught people who are amazing in any genre you want," he elaborated. More than 500 students come to WOM for lessons each week between the staff of more than 15 accredited instructors. "Performance and technique are important aspects of their lessons," clarifies Katie Jones, the music school's coordinator. "But the teaching staff believes that kids and adults who have fun learning will develop a lifelong appreciation for music."

Over the decades, the store has continued to thrive, being one of the relatively few large-scale, independent music stores in the nation. "There actually are not many 'mom and pop' music stores left in the country, as a result of the chains," Orr explained. Barely any of those run at the scope of WOM, with exceptions being metropolitan-centered wonderlands like the Chicago Music Exchange, Orr notes. "To have one this big in Erie is pretty amazing." That means that they can have personal agency over what they stock, and not be forced to push new and often ill-advised products (Gibson's Henry Juszkiewicz-era guitars, we're looking at you). However, co-owner Linda McLaughlin explained they "keep up to date on the current trends and popular products." Noting the store's staff, competitive pricing, and large inventory, she is also quick to highlight that "the fact that you can come in and try out our instruments and choose between several to find the right sound and fit is the main thing that sets us apart from our online competitors."

Percussionist Steve Barone started teaching at WOM in and now works on the sales floor as well. "Since I've been here," he said, "I've watched us tear down walls, build new walls, remodel the store, open new displays, take on new brands, and ditch old brands. It's been very cool to be a part of those everyday changes and see how it's evolved over just the time I've been here." He recounted that in the '60s the guitar area used to be reserved for pianos and organs, and marveled at the shift over the years. Barone was also aware of the current ongoing shift from traditional instruments to a more digital platform. "We are seeing a lot more of the electronic, digital music production things going on, with Ableton Live and the instruments that are controlling that," he admitted. With that he underscored the importance of music fundamentals, "to know why the button you're pushing is doing that," he laughed.

Making music can be a deeply personal experience. It's also something that's inherently collaborative — no matter how solo you want to go — at some level of the musical process. Working together, musicians are able to learn, grow, and thrive. To World of Music, that's a pretty catchy tune.

Nick Warren got his first real at the age of 13. You can hear some TV themes and improvisational loops at soundcloud.com/newwavecrashing/tracks or email him at nick@eriereader.com