by Nick Warren
View ProfileTwitterInstagramRSS Feed
June 19, 2019 at 9:45 AM 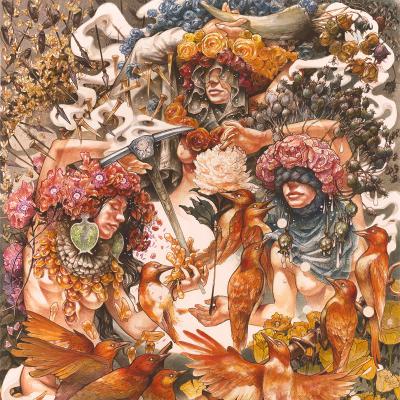 Baroness has an impressive track record. Nearly every one of their five studio albums has been met with considerable critical acclaim, and for good reason. Their latest is titled Gold & Grey, following the band's established format of connecting the album's title with the color scheme of its album art, done in gorgeous detail by the band's frontman John Dyer Baizley. Once again, the band has brought something fantastic to the table. A frenetic, fuzzy riff opens up the album, in "Front Toward Enemy," and Baizley's soaring vocals come in moments later. As a metal band, they barely seem to fit in the genre at times (though that does apply to many of their Savannah-based peers as well), with tracks like "I'm Already Gone" and "I'll Do Anything" sounding more like emo/punk stalwarts Hot Water Music than most filed under their given taxonomy. In fact, there are numerous times in the album's run where you nearly question if you're actually listening to Baroness at all, like the vibrato-laden interlude "Crooked Mile." The record is filled with epic moments, emotional passages, with complicated, technical leads around every corner, fit for fans of any genre. — Nick Warren