Legendary punk-rock band comes to the crooked i 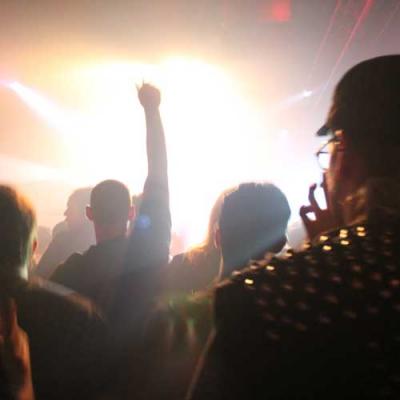 I walked into my apartment door late Tuesday night all a mess – a deep-pounding ache brewing up below my skull, stinking head-down-feet-up of a sour, earthy mix of hard-squeezed sweat (not all mine) and low-projectile Pabst Blue Ribbons (none mine): The badges of any bona fide punk-rock show.

But that … that wasn't any punk-rock show. That was the hardcore punk flagship that is Black Flag — the absolutely ferocious, on-fire, uncontrollable-'F--- YEAH!!'-producing Black Flag — tearing it up good and fast and loud for a packed, frenzied crooked i crowd.

"This is a big-city show," I heard over the back of some black-vested kid's head as he and a big mashup of others made their way in ahead of me.

Yeah, pretty much: A historic and looong-anticipated Black Flag reunion, featuring founding member/living guitar legend/hardcore punk icon Greg Ginn with early-era vocalist Ron Reyes (the core that a good number of longtime fans consider 'the' Black Flag), backed by other punk heavy-hitters and playing not Pittsburgh, not Buffalo, not Cleveland, but Erie's own crooked i.

"I've been waiting 20 years for this," said Josh Reed, an early-30s dude from Fairview with a bleach-white Mohawk (definitely no faux-hawk) and a Dead Kennedys T-shirt, who'd stepped out onto State Street for a quick smoke.

Bedrock punk-defining stuff like Black Flag, Dead Kennedys, Boxcar, Motorhead – "I grew up on it," said Reed. Thanks to good 'ol Dad, he added, "it's been in me since before I could even walk."

Further thanks to his old man, Reed said he did get to catch one previous Black Flag show, in 1993. He was 13: Epic, self-realizing time that is for any young punk.

So, for him, Black Flag's music and hardcore punk in general – the mind-blowing/crushing kind of sonic attack that was just about to start pounding through those walls (following a blistering-fast-and-hard opening set by Good For You, also featuring Ginn, with skatepunk legend Mike Vallely) – is, and has always been, "straight-up," about "freedom: The ability to be yourself. Screw what everybody else thinks," said Reed, a friendly smile on his face.

Especially right here in Erie, "I'm glad to see the punk scene is still alive and kicking," Reed said before heading back in. "It's just awesome."

Indeed, the feeling of that real, old-school DIY punk ethos – live by your own rules, account for yourself, give respect where it's due and reject where it's not – was alive and palpable in and out of the i that night. And along with Ginn's/Flag's singular presence and sound, it felt informed by the multi-generational mixed bag of showgoers – hard-head punks, young and not-so-young, and a whole lot of other people too – and accentuated by what had to be the most beautifully roiling, whirling mosh pit I've ever witnessed (and been thumped into and dumped onto from).

True to themselves, most of the people I asked to talk on the record for this little piece gave me a polite-enough but plenty-direct 'No thanks, man,' usually adding they were just there to do their thing and have a good time (or to that effect anyway).

And Ginn was no exception. Along with being across-the-board badass, he seemed like a really nice guy: hung out, shook hands, tipped his bartender, took time to talk between the bands' sets.

But, for the record, "I just don't do interviews," he told me a couple of times, sorta smiling and shrugging before he said "thanks anyway," shook my hand again, and walked back into the mix before going back on stage.

Ah, fair enough: He's Greg Ginn. He says what he wants to in plenty of other ways.

When it comes down to it, Ginn's "a super-chill guy – they all were," said Marty Schwab, the i's proprietor and a longtime Black Flag fan. And from everything they had to say to him, "they loved Erie," he added – for real.

"They were just blown away by the (crowd's) response," said Schwab. "The last thing Greg Ginn said to me was 'Let's do this again sometime.'"

Live music fans – punk or whatever – from Erie and all around the region (around half of the 300-plus tickets sold were to out-of-towners) "really responded" to the venue bringing such a high-caliber, historic show onto its bill, said Schwab. That "definitely motivates me to continue pursuing some of these big-name acts.

As far as maybe having Black Flag in again sometime as per Ginn's casual suggestion?

"I'll take it" anytime, said Schwab. Hell, "I wish I could have Black Flag every Tuesday night."

Ryan Smith can be contacted at rSmith@ErieReader.com.