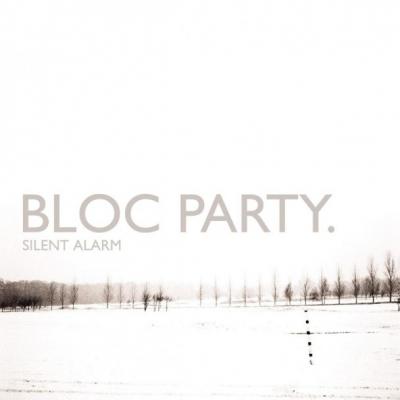 I was standing in the music section of my local Border's when I first glanced at a CD of Bloc Party's Silent Alarm that I would eventually purchase. I was a high schooler at the time, just a year or so into the period of my life when I truly became a music fan, and I would regularly spend the tip money I earned at Heinen's Fine Foods in Cleveland to procure new albums that might intrigue and excite me.

I had read a couple stories about Silent Alarm, including a glowing review from my mother's copy of Entertainment Weekly, so I bought the CD on a whim. After a few repeat listens at home, I was hooked by the dual guitar attack led by Russell Lissack and Kele Okereke, a soaring machine that could somehow match the emotional peaks of Okereke's passioned vocals.

Years have passed since that trip to Borders. In fact, it's been a whole decade since the release of Silent Alarm, a fact that took me by surprise until I read Chris DeVille's excellent anniversary piece on Stereogum. Like Chris, I also feel that people tend to forget about how great Silent Alarm was (and still is). In fact, sometimes I'll even be surprised by how good Bloc Party's debut is when I listen to it.

I still listen to CDs when I drive, mainly because the two vehicles I've called my own haven't had auxillary jacks for another listening device. Some of my favorite musical moments have come on long drives, when I can turn the volume up and immerse myself into the music while the scenery whizzes by me, leaving just me, an often empty road, and my little cocoon of sound.

I've returned to Silent Alarm several times since 2005, and I've learned to appreciate it even more during late-night trips on I-90. Like I mentioned earlier, teenage Alex was infatuated with the riveting guitar work and emotional vocals. Eventually adult Alex began to truly appreciate the backbone provided by drummer Matt Tong and bassist Gordon Moakes, efforts that provided necessary structure for Silent Alarm's riveting tracks.

There's an energy on Silent Alarm that feels indominatable, a rush of adrenaline that can't help but hit hard when you're doing 70-plus miles-per-hour on the highway. Songs like "Helicopter" and "Banquet" provides a one-two punch of Lissack and Okereke's glorious guitar tag team. I stop what I'm doing when "This Modern Love" plays, a song that grows into an absolute stunner of a song (on a seperate note, check out Owen Pallett's cover of it, which is also killer). In fact, Silent Alarm was even the second album I played for my girlfriend in my truck (the first was the Mountain Goat's Tallahassee, which is a really odd choice for a new couple when you think about it). That's serious stuff for me.

Really, my only main complaint with the album is the ending. "Compliments" is by no means a bad song, but there were so many other tracks that could have given Silent Alarm the finish it deserved (my personal suggestion would be "So Here We Are"). It's appropriate that the moody, drifting "Compliments" mirrors the direction Bloc Party would eventually take on future albums, efforts that could never match the numerous soaring higlights on the band's debut. It's unfortunate, but Bloc Party hasn't been able to live up to Silent Alarm, instead offering up some promising efforts that have missed the mark.

Still, I'm happy that the band was able to make an album that has impacted me as much as Silent Alarm. Even 10 years later, I still get the chills when I put that album into the CD player and blast it during a night drive, and that's a great feeling.