The history of brewing beer is a storied one. Tim Schnars II calls for a return to our origins. 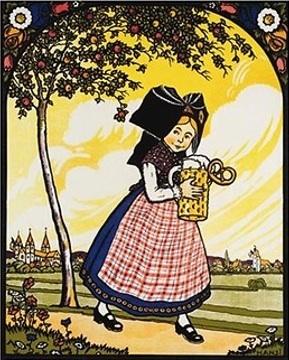 What if I told you that women, not men, were the original purveyors of beer? What if women were the stewards of beer for thousands of years and men only a few hundred?

It seems alien to think that women have anything to do with beer and the testosterone-laden, sports-enthusiast imagery that beer seems to invoke. The truth is that not only does beer owe more to women than men, but that craft beer needs women now more than ever.

Today in the U.S. there are 1,600 breweries, yet only 10 percent have women brewers, a paltry amount compared to 600 years ago. Why does it matter? It matters because craft beer culture is founded on the same principles that women brewers championed since the beginning of civilization: quality, community, and harmony with nature.

Beer has been around since the dawn of civilization and is argued to be the primary reason that humans converted from hunter-gatherers to sedentary farmers. One major reason beer is theorized as the catalyst for this shift is because beer is a nutritious, sterile food source with an increased shelf life. While whether woman discovered beer remains unknown, beer's creation myths point to the deft hands of goddesses.

Many ancient cultures have linked beer with the divine, with perhaps the oldest evidence found in the "Hymn to Ninkasi," dated 1800 BCE. Ninkasi, meaning "you will fill my mouth so full," was a Sumerian goddess credited with the creation and gift of beer. The "Hymn to Ninkasi" is a poetic prayer that almost reads like a beer recipe.

Ninkasi is not alone. The ancient Finns credit three women, Osmotor, Kapo, and Kelevator, who made beer but couldn't get it to work without the addition of bear saliva and honey. The Egyptians had Hathor, the "Queen of Drunkenness," who was ordered to punish humanity. Her blood lust was only satiated when her father Ra tricked her into drinking a lake of pomegranate juice and beer (appearing as blood), causing her to slumber and awaken as a peaceful goddess of beer, dance, and revelry. In these ancient cultures beer was an integral part of life.

One might think that Viking culture, with its violent masculinity, might be an exception to women-based brewing, but that is not the case. Law strictly governed Norse culture. Laws decreed that anything done in the household was the domain of women and that brewing equipment was women's property. In contrast to today's prevailing attitudes about beer, the Greeks and Romans viewed wine as masculine and beer as effeminate and inferior.

South America also has a history of brewsters with archaeological sites in the Andes mountains containing evidence that not only were women the brewers but elite women were the brewers. South America also sheds some light on why women were a dominant force in brewing. Chicha, a beer made from chewing up corn and spitting it back into a vessel, is converted from starches to fermentable sugars by enzymes found in women's saliva. On an episode of "Brewmasters," Dogfish Head Brewing Company sought to recreate this style and performed an experiment in their lab by collecting their employees spit. The in-house results showed that women had more of the essential enzymes present in their saliva than men.

By the 13th century, only 8 percent of brewers were male in England. In fact, Brewster is a common English surname referring to women brewers.

But not everything was sublime for brewsters and alewives. They weren't allowed to own taverns and if they were found guilty of making bad or adulterated beer, the enforced punishment was flogging by their license holding husband.

During the industrial revolution, many people moved into cities, and with cramped conditions, there was no room to homebrew. As with many crafts, the industrialization of beer turned a household chore and supplemental means of income into a commercial product. Also during this time, men had more political power and greater access to capital, effectively pushing women out of the commercial arena. By 1600, the majority of brewers were men. Many different styles women designed over centuries utilizing exotic ingredients were lost forever. Even new female traditions in the American colonies were quashed by industrialization and prohibition.

At this point I know some men may be thinking, "So what? Women made beer and men made it better!" Nothing could be further from the truth. Women were focused on quality while men were focused on quantity and profit growth. Beer became a bland, homogenized commodity with advertising focusing on the sexual objectification of women to capture their target market. The pinnacle of this degradation into negative female stereotypes happened in 1992, when five women filed sexual harassment lawsuits against Stroh's Brewing Company. They alleged being subjected to lewd and sexist comments and behavior and physical intimidation and abuse by male co-workers. They also alleged that this atmosphere had been cultivated by their "sexist, degrading" advertising of the Swedish Bikini Team for their Old Milwaukee brand. Stroh's refused to remove the advertising unless they "were to determine…that they were offensive to a significant segment of our consumer base…We believe [the advertising] is working."

And now we come to today. The majority of beer advertising is still blatantly chauvinistic and sexist. So how's business? Macro beer's profits are flat, causing them to prompt mergers and acquisitions, while Craft beer's growth is in double digits. The reason: more people want natural, locally crafted food and beverages, focusing on quality, community, and ecological efficiency. Women are largely driving this demographic. The diversity of craft beer offers a genuine experience that corporate monoculture beer will never be able to compete with or replicate. Craft beer has brought us full circle, and now it is time for women everywhere to take back the mash paddle.

At present, 27 percent of women who drink prefer beer. And contrary to popular belief, they like IPAs and stouts just as much as men do. In truth, women are more open to trying different styles than men are. Women also have better olfactory senses than men do, making them better tasters. It goes without saying that if there were more women brewers, there would be more women drinking beer, too. Women are generally more collaborative and less egotistical, and even though the craft beer industry is definable by camaraderie, more female influence would greatly increase attitudes of cooperation versus competition.

When Terri Fahrendorf, one of the founding mothers of the American craft beer renaissance, first attended the Siebel brewing institute, she was the only woman in her class. When she tried to get a job after graduation, prospective employers asked her, "Can you lift a 50 pound sack over your head?" and "Can you carry a full half barrel (160 pounds) up a flight of stairs?" Nobody, male or female, should be required to do these tasks. Terri's answer was to work smarter not harder, and after a few years as a successful brewer, she founded the Pink Boots Society, an organization of female professionals in the brewing industry. As of August 2010, their membership boasts over 400 women.

There are many female leaders in the brewing community in addition to Terri. Carol Stoudt of Stoudt's Brewing Company, Kim Jordan of New Belgium Brewing, Whitney Thompson of Victory Brewing, Deborah Carey of New Glarus Brewing, and many more are opening space needed to ferment a female revolution in brewing. I encourage more women to create beer clubs and homebrew clubs, and organize beer and food pairings and education opportunities. Currently, most of these kinds of activities are decidedly single-gender to provide a non-threatening atmosphere, but over time women will have to coalesce with men to gain the respect and equality they deserve in the craft beer community.

Beer anthropologist Alan Eames said, "Beer is the most feminine of all beverages." Does that mean men shouldn't be involved? No. Does that mean women should participate? Most definitely. If you're wondering why I would dare challenge women to reintegrate with a culture that men usurped from them, it's because I love beer, and it will never reach its full potential until the gender imbalance is corrected. Women of the world do me the ultimate favor, and make the "ale" in female something you'll uphold and carry on. You can do it by brewing some homebrew, dispelling negative female and beer stereotypes, or just enjoying a beer with other women. And to all would be brewsters, I present a toast and pray, "May Nikasi live with you. Let her pour your beer everlasting."