Detroit rapper Danny Brown will be working on a Dr. Seuss-inpired children's book while he writes his follow-up release to 2013's Old. 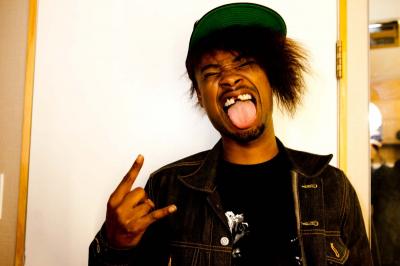 Move over Hans Christian Anderson and Roald Dahl, there's a new children's literature writer on the market. Detroit rapper Danny Brown announced on Australian radio station Triple J recently that he's working on a children's book, a development that not too many people likely expected from the 33-year-old MC.

Brown has recording his follow-up to 2013's Old with regular collaborators SKYWLKR and Paul White, but the high-adrenaline hip-hop performer is also allotting some time to create a Dr. Seuss-inpired book in honor of his 13-year old daughter, as originally reported by FACT Magazine.

"It's really about self-esteem in black girls, I guess," Brown said during the Triple J interview. "You know how black women do so much — process their hair, change their eye color — it's really about a little girl who does all these things to herself and changes herself and she realizes she's just better off the way she is."

It's pretty adorable that he's doing this for his daughter, although there are probably quite a few people finding out about Brown's new literary ways that might not be quite as intrigued given the gap-toothed MC's penchant for rapping about sex, drugs, and desperation. Still, if people like Keith Richards, Russell Brand, and, ugh, Jay Leno can put out children's book, I don't see why Brown can't. At the very least, the already hyperactive and rather amusing rapper should be able to create something interesting. I mean, this is the guy who is sharing his new house in rural Michigan with raccoons, squirrels, and deer (seriously, check out the Triple J interview embedded below). Plus, this is the guy behind the "Grown Up" video, so you know he's got some special insight into what it's like to be a kid. As for "Dip," well, maybe we can keep that one away from the kids.