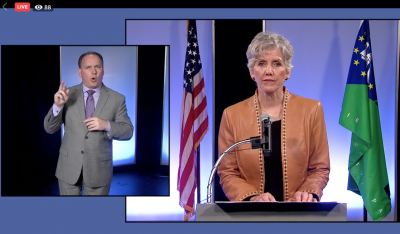 Erie County Executive Kathy Dahlkemper reported that there were two new cases of COVID-19 recorded in Erie County, for a total of 58 confirmed positive cases. There are also three probable cases (not reflected in the count of 58), and a total of 1,340 negatives. One of the patients listed as "probable" spoken of yesterday is now one of the two positive cases today, and is reflected in the lab-confirmed numbers. Both new cases are in Zone 1 (the City of Erie), with one being in their 60s while the other is in their 20s.

There are still 31 recovered cases, for 27 confirmed active cases. There have been no reported deaths due to COVID-19 in Erie County.

Chautauqua has 27 cases, with three deaths. Ashtabula County has 68 cases and six deaths.

Dahlkemper noted that "our continual low numbers are encouraging, and therefore it's important to understand that the work that's being done to keep our community safe and keep our numbers low is important work that we need you to be partners with us in."

Melissa Lyon, director of Erie County Department of Health, joined Dahlkemper via Zoom. Lyon expressed that "over the past two months, we as a community have made incredible strides in flattening the curve." She went on to say that "we have not faced the same devastating numbers as other cities in our state have to contend with."

Lyon outlined some of the Department of Health's roles, and provided a more detailed explanation of contact tracing.

When asked if the projected date of May 8th could see an end to the stay-at-home order, Lyon hesitantly said that "we would all say that we like the numbers and the way they are sitting right now. I think that healthcare systems are prepared should those numbers change drastically. Remember, too, that testing is still lower than we would probably like to see across the entire Commonwealth. I can't speak to the healthcare provider side of it, but I can tell you that these numbers look manageable, right now. And that can change very quickly."