Seven new cases of COVID-19 were reported in Erie County 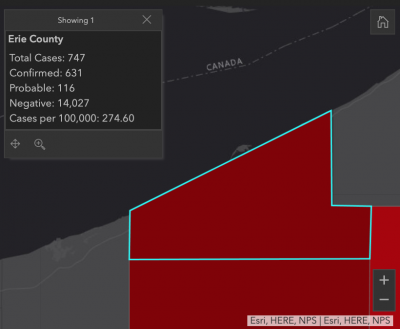 Erie County's cumulative positive case total has more than doubled in a little over one month. By our math, there have been 121 new cases reported over the last 14 days, for a ratio of 44 cases per 100,000 people in the last 14 days.

Outside of Erie County's statistics, Pennsylvania, saw 994 additional positive cases reported today, for a total of 97,665. So far, there have been 6,957 deaths statewide, with 26 deaths reported in the last 24 hours. 870,984 Pennsylvanians have tested negative to date, with 20,372 negative tests yesterday.

If Erie County were to proportionally have as many cases as Pennsylvania, the county's total cases would be roughly 2,100.

Erie County's negative tests account for 1.61% of Pennsylvania's, a number which has held relatively steady over the last several weeks.

There were 241 new positive cases reported in Allegheny County today, for a total of 5,610 cumulative cases and 201 deaths.