by Nick Warren
View ProfileTwitterInstagramRSS Feed
May 1, 2020 at 3:36 PM 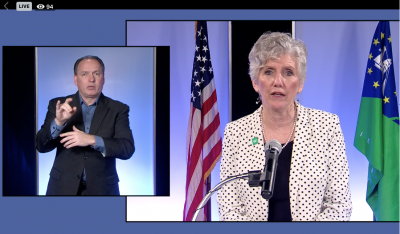 Erie County Executive Kathy Dahlkemper reported that there was one new positive case of COVID-19 tested in Erie County, bringing the total to 88 cumulative positives, and 1,892 negatives. So far, 64 people have recovered from COVID-19 in Erie County, for a total of 22 active cases. There have been two deaths of Erie County residents who tested positive for the disease.

Statewide, there were 1,208 additional positive cases reported yesterday, for a total of 46,971 total cases. So far, there have been 2,354 deaths statewide, and 180,477  patients who have tested negative to date.

Crawford County still stands at 19 positive cases (no change since last Friday) with 689 negatives, while McKean County remains at six with 167 negatives, and Warren County at one (no change since April 3) with 175 negatives. This marks the first time in Dahlkemper's address where she gave the negative tallies for surrounding counties.

Chautauqua County currently has 36 cases (up three) and three deaths. Ashtabula County now has 126 cases (up 10) and 15 deaths.

Dahlkemper quickly addressed Erie's movement to the Yellow phase, scheduled for May 8. She noted that some businesses that would remain closed such as: Gyms, spas, nail salons, hair salons, massage therapy, casinos, and theatres. Restaurants and bars will remain open, but still for takeout and delivery only. Gatherings are limited to 25 people.

A more thorough list will be released on Monday, May 4.

Though the stay-at-home order will be lifted, social distancing practices will remain in effect. "We now have the opportunity to start the process of rebuilding Erie County's economy again," Dahlkemper explained. "Your partnership in doing this properly by following guidelines and proceeding with caution will be the key to success and to future growth for all of us," she continued.

She later stated "we believe it is almost inevitable that we're going to see a spike in cases, and that's why we're looking at what kind of teams do we need to build out to react to any cases that will come forward."

Dahlkemper also announced that free wi-fi would be available at all public library locations. Though these branches remain closes, the signal will now extend approximately 100 feet around the buildings to include nearby parking lots.

After fielding questions about delays from the state in clarifying sections of the Yellow phase, Dahlkemper asserted that "we have been, I think, the best example, honestly, I would say in the state of how you do this right."

" I asked outright about the [Millcreek] Mall, and I was outright told the Mall will not be opening," she stated toward the end of the broadcast.

by Nick Warren2 hours ago
No local deaths reported by Erie County Dept. of Health