by Nick Warren
View ProfileTwitterInstagramRSS Feed
May 4, 2020 at 3:34 PM 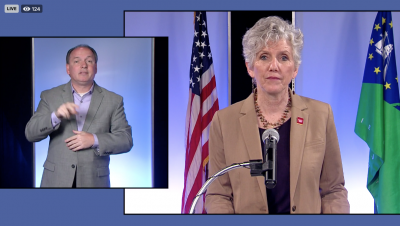 Erie County Executive Kathy Dahlkemper began her daily address by commenting on the warm weather this weekend, though she was quick to point out that "I have to say it was actually alarming to see a lot of people gathered without wearing any masks, and store parking lots just packed." She reiterated thoughts about the continued importance of social distancing, especially as the county moves into the Yellow phase of reopening.

She reported that there have been three new cases of COVID-19 reported in Erie County since Saturday, bringing the total to 93. Two of the cases were in their 40s, while one was in their 50s, and all three reside in Zone 1 (the City of Erie).

The county has seen 2,133 negative cases with 67 recoveries, for 26 active cases currently. To date, there have been two deaths in Erie County due to COVID-19.

At the time of the address, there had been no further details from the state regarding the Yellow phase restrictions, which were scheduled to arrive that day. There were many specifics sent to the Pennsylvania Department of Community and Economic Development (DCED) pertaining to selected businesses.

Dahlkemper noted that under the recent Worker Safety Order made masking a requirement for both workers and customers.