by Nick Warren
View ProfileTwitterInstagramRSS Feed
May 8, 2020 at 4:23 PM 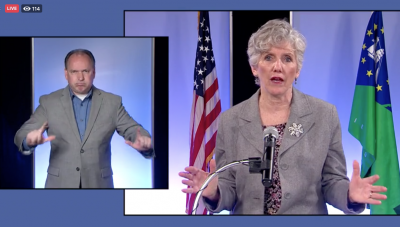 Ten new positive cases of COVID-19 were reported in Erie County. Of these, three are in their 30s, two are in their 20s, 40s, and 50s, and 60s, with one teenager. Four are located in Zone one (the City of Erie), one is in Zone two (Millcreek), and five are located in Zone five (the western portion of the county including Fairview, Girard, Edinboro, and Albion).

This brings the cumulative total to 114 positive cases, with 2,503 negatives. So far there have been 79 recovered cases, for a total of 35 active cases. To date, there have been two COVID-19-related deaths from Erie County.

To get a scope of this virtually exponential surge, the number of positive cases reported in the last two days is equal to the number reported during the initial span of March 18 to April 3.

"So, that's two big days for us in a row, in terms of numbers," Dahlkemper said, referencing the then-record number of nine cases announced yesterday. "The good news is that some [five] of these cases are connected, and we're doing the contact tracing to get those people isolated and quarantined as soon we can." Dahlkemper later confirmed that the related cases were coworkers, of an undisclosed businesses, assumed to be in Zone five. Dahlkemper confirmed that the business in question is still currently open, and accessible to the public.

Chautauqua County is at 40 cases (up two) and four deaths. Ashtabula County saw no changes, with 169 cases and 18 deaths.

"As we prepare to celebrate Mother's Day on Sunday, I ask everyone to make responsible choices, especially for moms in the older age range," Dahlkemper implored. Though virtual visits are by far the safest option, she urged those who did choose to make an in-person visit to wear a mask, keep six feet away, cut down on the visit's time, and to refrain from hugs or embraces, "as difficult as that might be, because we all like to hug our moms," Dahlkemper said warmly.

"I would like to mention that a lot of outrageous rumors have been circulating on social media," Dahlkemper pivoted. "Rumors such as yesterday's spike in numbers was just a scare tactic. I assure you, it is not my intention to scare anyone," she continued, explaining that "though I do want you to be informed, concerned, and proactive."

She explained the process of how they receive their numbers.

"COVID-19 tests are being ordered by doctors throughout the county, going through at least four different laboratories, who run different test systems, and then report their results to the state, in the system I have been talking about for weeks, the NEDS system. No one is making up these results. This pandemic is real, and it has made its way not only to Erie County, but it has made its way around the globe. I would encourage you to find it in your heart to care for the people around you. What you do and what you don't do can save people's lives. I would also encourage you to be very careful of the information that you share with others, especially online. Much of the information that's going around on social media is dangerous. It's dangerously incorrect. But our main focus is truly fighting this virus, and I hope that would be yours too, because you know what, we're all in this together."

Dahlkemper noted that the environmental task force was actively checking in on local businesses on this, the first day of Erie's Yellow phase. She highlighted two examples of what she referred to as "model businesses," noting the efforts of Kraus Department Store on Parade Street and Creamland on West Ridge Road.

James Grunke, president and CEO of the Erie Regional Chamber and Growth Partnership – online at eriepa.com – also addressed county residents. Returning from his April 1 appearance, expressing a cautious exuberance for the reopening of many businesses today. "I have to say, the business community is both excited today to be in Yellow, but they're also very nervous," he explained. "They're nervous for themselves, they're nervous for the safety of their employees, they're nervous that they can provide safety to their customers, and so I hope we all look at this as a strong partnership, and be patient as we all learn how to go about doing business again."