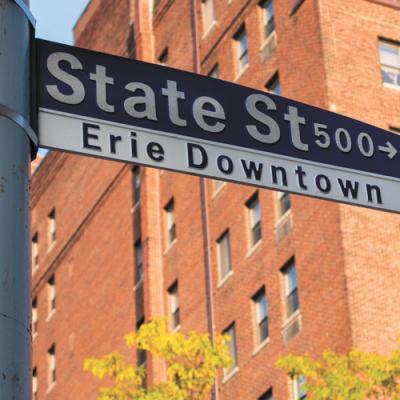 With the annual Downtown Block Party series, rockin' out on Thursday nights for great causes has become a Gem City summer institution.

Last year's series featured various bands performing at several downtown hot spots to benefit a variety of worthy local charitable organizations. And get this: It raised a record-breaking total of $58,579.

Last year's series featured various bands performing at several downtown hot spots to benefit a variety of worthy local charitable organizations. And get this: It raised a whopping, record-breaking total of $58,579.

Hoping to up those impressive figures (and the rockin' out) even more, the 2016 Block Party series kicks off Thursday, June 9. Erie live music staples Jake's Blues and Key West Express will perform at Molly Brannigan's and Sherlock's Park Place between 6:30 and 10 p.m.

The kickoff party will benefit #AJO (the AJO Forever Foundation), an Erie-based non-profit organization that strives to raise awareness about epilepsy, and provides support and seizure monitors to area people in need of such services.

The Block Parties continue with the Breeze Band and Radio Age performing at U Pick 6 Tap House to benefit the Boys and Girls Club on June 16; School of Rock, Next of Kin, and Refuge at Erie SeaWolves to benefit YMCA of Greater Erie on June 23; Malpractice and Radio Age Bank at Sullivan's Pub to benefit ANNA Shelter on June 30; Smilo & the Ghost, C. Cross, and East Coast Turnaround at McCoy's Barrelhouse & Grill to benefit Boots on Ground on July 7; Whiskey Road and Small Town Revolution at Sluggers Sports Bar and Grill to benefit Make-A-Wish Foundation on July 21; Small Town Revolution and Geek Army at Park Place and 28 North Gastropub to benefit Therapy Dogs United Inc. on July 28; Ruby Port Band and Man's Room Band at the Brewerie at Union Station to benefit Flagship Niagara League on Aug. 4; Money Shot 2.0 and First to Eleven at Bourbon Barrel to benefit Crime Victim Center of Erie County on Aug. 11; and The Groove and Erie All-Stars at Calamari's Squid Row and 814 Pub & Grille to benefit Voices for Independence on Aug. 25.

For further information about the Downtown Block Party series, its performers, the causes it supports, and other details, visit eriedowntown.com. – Ryan Smith