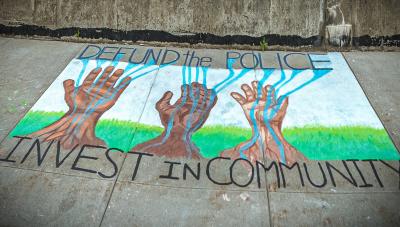 Erie Equal had been planning a small mural for weeks. On Friday, June 26 a group of volunteers coordinated to create a chalk message near the corner of South Park Row and State Street. The group – who has risen up over the last month to organize daily peaceful demonstrations in downtown Erie and Frontier park – was inspired by countless works of public art created in the last few weeks depicting George Floyd and messages of the Black Lives Matter movement. There was a simple message: "Defund the Police. Invest in Community."

Hours later, it was gone.

"As soon as I wake up, the first thing I get is a call from a member of the group," described Andrey Rosado, speaking on behalf of Erie Equal. "And it was brought to my attention that they were downtown – and I think the mayor showed up, I'm not positive, there are pictures and while I can't quite make it out, there were reports he was there – and they were power-washing it all the way." He continued, noting that "they approached somebody in the group this morning, and they demanded to speak with them. So the member of the group spoke with them, and the officer made the claim that what happened with the mural was criminalistic and was seen as public desecration."

"And they said an investigation will be started. As far as his investigation goes, it doesn't really make sense to me. We didn't really break any laws. Nothing we used is permanent. It was just simply chalk mixed with Mop & Glo."

The medium used was intentionally the same as that used for CelebrateErie's ChalkWalk, put on by the City of Erie. Members of the group contributed to offset the costs of materials, which totaled over $450. The mural was designed by a black artist who was assisted by black, brown, queer, and immigrant volunteers, as well as white allies.

"It's the exact ingredients they use for the chalk walk," Rosado explained.

Group members made sure to adhere to Pennsylvania law under Title 18. They also referenced ACLU charges from a similar case concerning the removal of chalk messages on public sidewalks, against the unforgettably named of City of Defiance, Ohio.

According to YourErie.com, Mayor Schember stated that "no one spoke to City Hall concerning the mural. This building is not a place to express political views with painting."

"I know if we painted a big beautiful mural that said 'support the police' and had a whole bunch of nice things about them, it would probably be sitting there still right now, and would continue to sit there until it went away on its own," Rosado wagered.

Rosado compared the complicated mood of Saturday afternoon to the one of the previous day, stating that "it was beautiful to see. I got downtown yesterday, and I saw a bunch of families out. There were kids playing in Perry Square, kids of all colors playing with each other. We set up hydration stations, we had pizza come. We had a bunch of different snacks and stuff like that for the kids," explaining how this was an intentionally family-friendly event for members of the group. 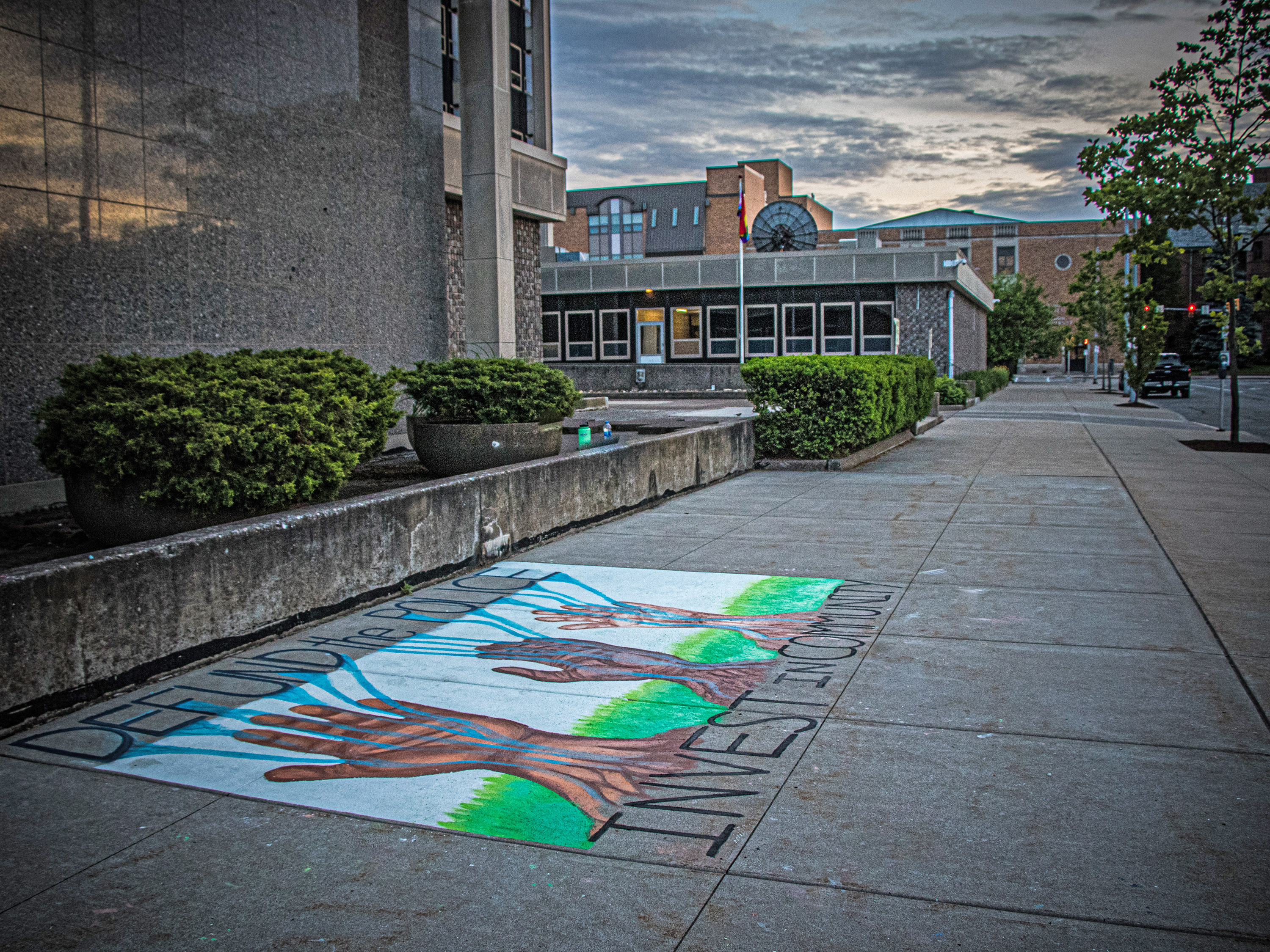 Aside from one police officer who asked to take a photo of the mural, there was almost no police presence while the work was being done from when the group arrived at Perry Square around 12:30 p.m., until the mural was completed shortly before the group kneeling at 8:19 p.m. "A couple of cops drove by and waved at us, some smiled," Rosado noted. "The National Guard truck went by earlier in the day, and waved and smiled, so nothing really going on too much until this morning."

"I haven't gotten any more information on the 'investigation' yet," Rosado noted. "I'm sure somebody will be reaching out to me, but if a police officer would like to speak with me, I'm all ears," he explained. "I know I didn't do anything wrong. Neither did anybody in that group."

The group has a large rally and march in planning near the end of July, though an exact date was not available.

There are at least two more murals scheduled, one on July 11 near the County Courthouse, and one on July 18 near the Board of Education, with the group planning to continue both.