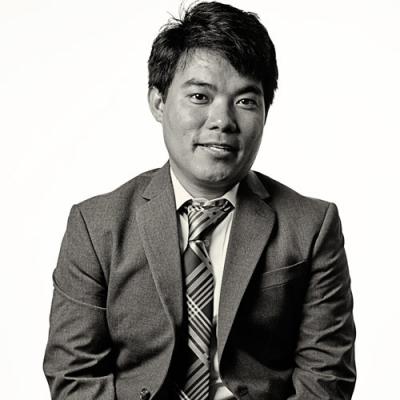 "Children all over the world are the same emotionally; the only difference is their lifestyle and resources."

Ed Bernik: Why did you leave Bhutan and come to the U.S.?

Gyan Ghising: The United Nations realizes that [the Nepalese Lhotshampa] are the victims of abuse from Bhutan. They kept coming to Nepal; there were 90,000. The UN had a refugee program, giving them shelter, clothing, and food. But that was not the final resolution for the situation. They had been living for 21 years as victims in these refugee camps, thinking that one day the Bhutanese government would take them back home. Senior intellectuals met 15, 16, or 17 times at summit meetings with India, Nepal, and Bhutan, talking about Bhutanese refugees; but none had any final solutions. So after more than 20 years, a decision was made to divide the refugees between nine countries. Canada took five percent. Australia took 10 percent, the UK said they could only take one percent. The U.S. said they would take 60 percent. I like these people!

After I graduated from college, I started running my own private boarding school in our refugee camp. I accepted students from nursery school to seventh grade.

Nancy J. Powell, U.S. Ambassador to India and Nepal, visited the refugee camp in Nepal in 2007 and 2008. She talked about a durable solution, telling us that we needed to choose between staying or going to countries that would accept us. My uncle, who came to the U.S. before me, thought it would be better for me to come to Erie.

For three months the government helps with your needs, utility bills, etc. You get food stamps for six months. Then, you must start working, and have to be on your own, as I am.

That is why depression starts after six months. So there are many suicides. Some lay on the railroad tracks, some drink themselves to death.

I know of one who, a couple of days ago, put gas all over his body, lit himself and burned to death.

People get depression because they are obligated to pay money back first. They sign, "I will pay within three years." Six months after landing they get their first letter saying they have to make their first installment payment on the $1,500. They haven't even started to work yet. And then they also get their electric bill, water bill, and rent bill. Then they get depressed.

They have no car to go to a job. Sometimes the bus doesn't go to where they work; local transportation doesn't go to hotels or plastics companies.

And some of them have little children, who go to school. Children 12 or 13 years old can take care of themselves, but younger children still have to be taken care of by their parents [who need to be at work]. If children have no care, the CIS is taking them.

One depression is the job and the second depression is citizenship. Thirty percent of the Bhutanese refugee population is illiterate. They have no idea what the letters or numbers are but they can speak the language. Twenty percent go to school to try to learn and they can't do it.

If you can't get a job, you have to leave. Some have children here; their whole lives.

So people die from depression. This is the situation.

This is the kind of issue that our country has to think about: If the U.S. takes these refugees, they have to commit to caring for them. Seventy percent are able to work. But other people, like those with autism, cannot. A learning disability is the number one problem for the 20 percent who can't work or get citizenship. This is what the Bhutanese people are facing right now.

EB: How did you start your life in Erie?

GG: As a janitor, first shift, and at a plastics company second shift. I also worked Monday through Wednesday as an interpreter for medical, legal – or whatever Nepali speakers needed. So I had three jobs. Then I worked as a cashier.

I quit the janitor and plastic shop jobs and started working at the Multicultural Community Resource Center as a refugee teacher and interpreter, and taught English as a second language. I have a degree in English in Nepal. After two years, I got another opportunity to work at Presque Isle Downs and Casino as a blackjack dealer. I got a full time job as a dealer, and I quit all the jobs but this one in 2013.

EB: I understand you are also a musician.

GG: I am a singer/songwriter. Kelly Armor from the Erie Art Museum put me in Old Songs, New Opportunities (OSNO), where I had the opportunity to be recorded. Refugees are trained to teach and share music in childcare centers, and within three months, I got a job.

EB: So you work at the casino, you teach, and you're also opening a bar and grille.

GG: Yes, on Route 5 by GE. We plan to have the closing later this month, calling it the Himalayan Bar and Grille. We are now just waiting on the PLCB. I would like to have some Nepalese food – about 62 items. My plan is to invite different bands to play on Fridays and Saturdays. We are fixing it up on the inside and outside with painting and gardening. It is a nice area and we hope to give people an enjoyable place to go. The Nepalese people will make it their home bar and we hope others will, too.

Explore the Dynamic Works of ARTrageous at the Erie Art Museum