Erie is home to many haunted places ? both good and evil. Rebecca Styn tells us of the ghouls haunting St. Paul?s United church in downtown Erie and the land that once housed Gudgeonville Bridge. 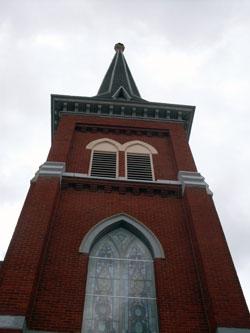 Erie is home to many haunted places ? both good and evil. A headless horseman, the spirit of a little girl that fell tragically to her death off a cliff, and one young churchgoer accidentally killed in a freak car accident, are just a few that can be seen -- or heard -- in our area. Several paranormal groups have conducted investigations into the local dwellings that house these spirits -- St. Paul?s United church in downtown Erie and the land that once housed Gudgeonville Bridge. And all of them believe that whether the presence is good or evil ? through their findings -- there is proof of life after death.

St. Paul?s UCC
I stopped into St. Paul?s to speak with Minister Robin Swope [lovingly known as the Paranormal Pastor] on what was a perfectly dreary, dark, rainy Tuesday. The church had recently gone public about its hauntings. In fact, it has had about 50 investigations from ghost hunters across the tri-state region, so Swope felt that was a fitting place to meet. And I couldn?t ask for better weather for such a visit?sunny days and the supernatural just don?t go together in my book.

And speaking of books, in addition to his ministry, Swope is also a writer, having penned: An Exorcists Field Guide; and Eerie Erie, Tales of the Unexplained from Northwest Pennsylvania; adding only to his credibility on the subject at hand.

St. Paul?s sits in downtown Erie, on 10th and Peach street, where the Eriez Indian tribe once had their main settlement. The church was established in the 1800s and thousands have worshiped there over time. While many of its members have left the mortal coil of life, some have never really left the church.

According to Swope, ?There was a young girl, Katie, that was part of our congregation. She had an infectious little laugh, and she often helped out in the nursery. In the summer of 1994, as Katie was coming back from church camp, there was an accident and the van she was riding in veered into a tree, killing her instantly. Today, though, we believe she still hangs around the church. Sometimes, someone will hear her laughter when nobody else is around ? and sometimes it?s accompanied by footsteps or the door to the nursery will open or close on its own.?

The paranormal groups also get active feedback, such as audio or video of supernatural activity, from the church.  ?One night, a group was conducting an investigation ? yet, weren?t receiving any feedback.? Although Swope doesn?t normally participate in the investigation process, he offered to say a verse of what he would normally give at a blessing. ?So, I said, ?If there?s anything here, I command you in the name of Jesus Christ to manifest yourself.?? Swope then bellows, ?there was this loud boom right above us, and it sounded like something huge was being dragged across the floor.?

The most recent story comes from the Pennsylvania Society for Paranormal Research. ?A couple of months ago, the group did an investigation and once again was about to give up because they couldn?t get anything from it. They were cleaning up about 1 a.m. There were people in the sanctuary, people in the stairway, and people downstairs. Suddenly, the people in the stairway and downstairs started to hear the church organ play a hymn, and they were able to even record it. The thing is, not only was nobody playing the instrument, but the individuals in the sanctuary [where the organ is located] never heard a thing.?

Gudgeonville Bridge
?It?s the land that?s haunted?not the structure. I receive more electronic voice phenomenon (EVP) activity now than I ever did before,? says James McCann as to whether the bridge being burnt down had any bearing on the hauntings. Swope had directed me to McCann, founder of A Paranormal Group, a paranormal investigation organization located in Erie.

?When I first started going to Gudgeonville, I really didn?t get pick up much activity. In fact, I almost gave up. But then I decided to start going there more frequently?about three nights a week. I finally started picking up audio on EVP. At first it was residual type voices, which are messages that just repeat itself. I would hear ?get out,? ?leave,? but that was it. Obviously I didn?t listen,? he adds jokingly, ?however, I find now that they?re used to my presence?and I get phenomenal reads at times.?

According to McCann, the voices started to become more intelligent over time. ?I can hear clear messages such as ?Jim, you remember me,? and other full sentences on my recordings. One night when I was out there with a group, I was talking to a few of the women amongst us. When I went back that night to go over the audio, during one particular conversation I was having with the girls, you can hear a disembodied male voice interject with ?those girls are cute,?? McCann tells me comically.

Although there are many tales that surround the bridge, there are a handful of ghosts that individuals have experienced sightings of time and again.

In the mid 1800s, a man named Obadiah Will was delivering a mule named Gudgeon [the bridge?s namesake] to a man in Meadville. As he was crossing the bridge, a couple of barges carrying Dan Rice's Circus were floating down the creek below and a calliope was playing. One story says that when the music reached the mule's ears, it literally froze and wouldn?t budge off the bridge. In frustration, Will beat the mule to death. To this day people hear the sound of hooves crossing over the bridge.

McCann tells me, ?On April 19, 1964 a little girl named Darlene fell 225 feet face first off the cliffs (known as Devil?s Backbone) by the bridge and died. To this day, people say they can still see the act as it occurred -- an image of a little girl falling -- and though I?ve never personally seen it, from time to time, I do catch child-like voices on audio. And there have been times I?ve gone out there and heard a little child giggling.?

There are also witnesses who have reportedly seen a manifestation of a headless horseman on a black steed with fiery red, demonic eyes ? some paranormal groups have even picked up photos of what look like outlines of such a person. There were also apparently many tragic deaths associated with Elk Creek, which runs under the bridge, during the war of 1812?and beheading was not uncommon during that time.

As for what McCanns recorded: ?I?ve captured strange lights?photos that look like apparitions. One night I went out to the bridge to run some video. I was alone. As I was setting up my camera, I heard something rustle in the tree across from me, but when I turned around there was nothing there. Now, there was no wind that night. Still, I brushed it off, went back to the video camera and then all of a sudden behind me I heard footsteps stomping on the road?as if someone was walking towards me. I was overcome with a sense that someone was watching me and was trying to come in towards me, and I almost felt like I couldn?t breathe. That was a bit much,? he says with a small, hesitant laugh, ?so, I called it a night.?

So after gathering this information, I started writing this piece at my office at the end of my workday. Nobody was there, and it seemed to be growing progressively darker by the second. Outside, fifty-mile-per-hour winds were gusting and driving rain was battering on the windows that surround me. Inside, all I could hear were loud creaks and groans in that older structure that although likely naturally occur, seemed ominous at that moment. You could probably guess what happens next: I too decided to call it a night. So I finished the piece the next morning, in the comfort of my own home, with the lights on and a comedy on the television in the background. Because truthfully, whether a spirit is good or evil?I don?t know if I?m ready to see?or hear?it.