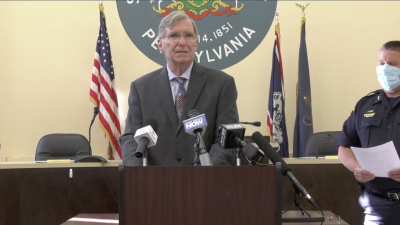 Detailed In an article published on GoErie.com on Thursday, June 18, Jeff Annunziata, chief Traffic Investigator with the Erie Police sent an email to Mayor Joe Schember, along with several members of the Erie Times-News staff. The email was sent at 7 p.m. Monday, June 15, with the article coming out at 12:01 p.m. on Thursday.

Later that day, Erie Mayor Joe Schember conducted a press conference at 6 p.m., stating that "Sergeant Jeff Annunziata of the City of Erie Police Department sent an email to members of the media containing racist and derogatory statements and assertions." He went on to say that "I condemn these statements. I am appalled and disgusted by the racial insensitivity of his email. This kind of prejudice has no place within the Erie police department or within the city of Erie. We will not tolerate discrimination or racism. As mayor of the city of Erie, I am terminating the employment ofJeff Annunziata as an Erie police officer."

"I have been vocal about our vision to create a community of choice that is welcoming and celebrates our rich cultural diversity," Schember continued. Everything that we have done, has been focused on achieving that vision. We have been working hard to build relationships in the community, and to heal the deep scars of racism and prejudice. The views and language expressed in the email diminishes the trust between the police and the community at a time when that trust and partnership is critically needed."

City of Erie Police Chief Dan Spizarny stated "I speak for the command staff when I say that we are all sickened by the language of Mr. Annunziata. We took an oath to protect and serve. Mr.Annunziata's language should not be construed as to reflect the rest of the Erie police department." He continued, explaining that "upon discovering email, I directed internal affairs inspector to perform an internal investigation. Our investigation confirmed that he sent the email that he sent it from a City of Erie email account. And that within his email, he identified himself as a police officer, I immediately suspend it, Mr. Annunziata." Spizarny clarified that "though our country was founded with the long-standing principle of freedom of speech. The city of Erie police cannot and will not allow taxpayer money to be used to spread hatred and bigotry." Mr. Annunziata's views are not reflective of the Erie Police Department. His actions, including sending this email, warrants immediate termination. The Erie Police Department recognizes that public trust and confidence in the police is critical to performing effective policing, and is achieved through fair and equitable treatment of the public."

Below is the unedited text of Annunziata's email, according to GoErie.com:

People, Why are the facts ignored about the killing in this country and how small, the mInute numbers of Police officers that kill a black man in the line of duty? Why is the fact that the officer in Minnesota are paying for their lack of judgement ? What gives the protesters the right to cause damage and disobey public order? Minorities (BLACK PEOPLE) talk of SOCIAL JUSTICE when they cannot take care of their own or anyone else with out playing the race card, why? I see this all the time and many well know people of color agree with this, but are subsequently called Uncle Tom. All I want to see is equality also, but watch the reverse that has taken hold here in this country with the destruction of this countries history in the SOUTH AND OTHER STATES. Right or wrong it is the History of this Country. Why do you reporters not comment on the Destruction and Vandalism of National monuments WHY? I am glad I am a police officer in this city because we have adapted to change and how to treat people in the community. Those other communities need to adapt but it is not going to happen with rioting, looting and destruction of your neighborhoods and cities. Why is it that reporters do not report on the officers in this city that were injured trying to protect what people have built. You as reporters have a responsibility to report the whole story not the part you want to report for your own satisfaction and that of unnecessary movements. BLM is know to have attached itself with ANTIFA WHY? why is the Dem party with the likes of backers like George Soros & the Clinton foundation who are funding BLM & Antifa why? To say BLM and not all lives matter is racist, to stop a confederate flag from waving is a violation of the first amendment, why is this ignored. What about police lives that are killed in this country, why was there no protest when my friend and brother officer Richard Burchick was murdered by a black man? Why is the murder of retired ST. Louis Police Captain (Black Cop David Dorn) murdered and there was no protest for him, he was killed by a young black male ? 48 officers were killed in felonious acts in 2019, where is the protest for their deaths? Why is it important to kneel during the anthem when if they did this immediately after, I believe it would be widely accepted and participated in even by the fans. The protest is right and just, the timing has been dictated by the media. Mr. mayor how many officers need to be hurt before you speak out about the what is going on, this issue affects us all. The 'deep state' media, reporters are responsible and the 'radical' liberal politicians are right behind them. Their argument serves no purpose but perpetuates the problem because they show the problem but do not offer solutions, fair solutions we can all agree on. Remember we as police interact when we are called upon for help, and sometimes things get out of hand because People do not understand compliance. There is not one police officer that I have met around the country that seeks out controversy instead of an agreement NOT ONE. I have been around the country talking to police officer in my 34+ years career, we always look for a peaceful resolution, but when we are confronted with dissension, weapons of all kinds and argument we have a job to do and hopefully with peaceful results. As we know this does not happen when a law is broken and the suspect or citizen does not understand what they have done, was done wrong and against the law. Jeff Annunziata citizen, taxpayer and police officer.