by Alex Bieler
View ProfileFacebookTwitterInstagramGoogle+RSS Feed
April 4, 2012 at 9:56 AM 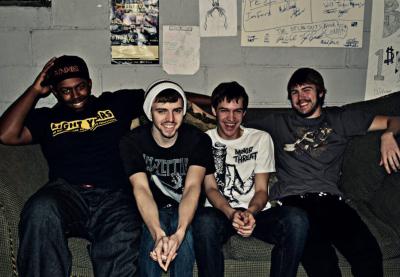 A little over a month ago, a group of young musicians took the stage at Basement Transmissions, looking to conquer Sardonyx Productions' Erie High School Rock Challenge. From those 16 bands, a winner emerged, turning these youths into, well, more successful youths.

After a collection of shows over a span of three Saturdays, the challengers were narrowed down to a super seven, featuring middle school, high school, and college-aged performers duking it out on a single night for a smorgasbord of prizes, including studio time and a small two-city tour for the top team.

I drove up to the Saga Club that Saturday to find the parking lot packed. My trusty truck, Ol' Big Sexy, and I looped the lot as a din of guitars echoed from the entrance. A large crowd watching had their eyes drawn to the western wall, as Day Three finalist Stage 5 rocked the crowd with a cover of Franz Ferdinand's "Take Me Out."

Surrounded by a group of gangly guitarists and bassists barely taller than their instrument of choice, Mike Moscato, owner of Sardonyx Productions and mastermind behind the event, credited aspiring artists for the reasoning behind the event.

"I'm just trying to do this because I was a young musician," Moscato said, as some finalists equipped with hi hats and snare drums snaked by. "I always liked getting advice from people that were way ahead in their musical careers."

After having success with a similar challenge in Pittsburgh, Moscato kept tabs on competing bands. A Lovely Crisis, a band that finished third last year, even returned to kick off the final show. After experiencing the trials of being in bands early on, Moscato wanted to give the new wave of up-and-comers a shot at exposure.

"I don't think I've ever played a show with that many people," Dan Mello, lead singer and rhythm guitarist for Day Two winner and finalist Squid Vicious, as well as nephew of the Erie Reader's own Brian Graham. "It was a lot more than I expected. The place was packed."

While Mello said he isn't banking on immediate success from the band's stint in the challenge, the chance to play in front of an expanded crowd for a chance to further Squid Vicious' fan base was an exciting experience nonetheless.

"We don't expect anything big out of it, but it's great," Mello said. "We play because we really like playing music."

As I stood facing the Saga Club stage, I saw just that: a group of young musicians loving every second of their chance to strut their stuff.

While each band owned the spotlight over the night, eventually a winner had to be decided. After the show, the top three were announced online, with Kevlar taking first prize, followed by Paradox Please and Bail Easy in second and third, respectively.

Now that they've finished the challenge, the various aspiring musicians can head back to the rest of their lives, whether that includes more shows, a job, or geometry homework. But even though the event is over, Erie can be assured that the area's young musicians are ready to enter the area's scene.