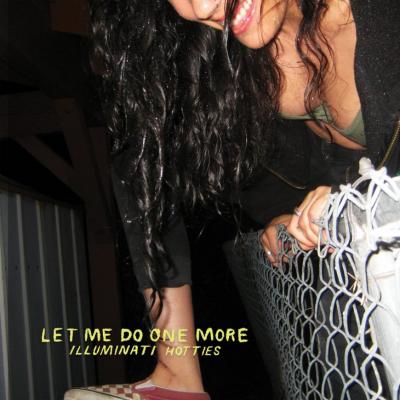 Hopeless Records
Let Me Do One More Album Cover

The third album from Illuminati Hotties finds the band (essentially comprised of songwriter Sarah Tudzin) returning to the glory of their nearly flawless debut album, Kiss Yr Frenemies. While 2020's FREE I​.​H: This Is Not The One You've Been Waiting For was a noble venture, it simply didn't rise to the great heights of Tudzin's debut effort — its status even debatable for inclusion in the band's catalog, according to Spotify at least. In Let Me Do One More, we see a varied roller coaster of emotions that truly balance out the album and see it rising above simple pop rock. The Beach Bunny-esque singalong choruses and earworms of the opening track "Pool Hopping" and the classic punk sounds of "Joni: LA's No. 1 Health Goth" paired with the final track "Growth" showcase the amazing versatility Tudzin has on tap. An accomplished producer, she's able to perfectly capture the sounds the band needs for every moment. Even reading the track titles above, her tongue-in-cheek humor is perfectly clear, oxymoronically coexisting with passionate and heartfelt cuts that paint a full picture of an artist at the top of her game. — Nick Warren