Fair enough? Not quite. 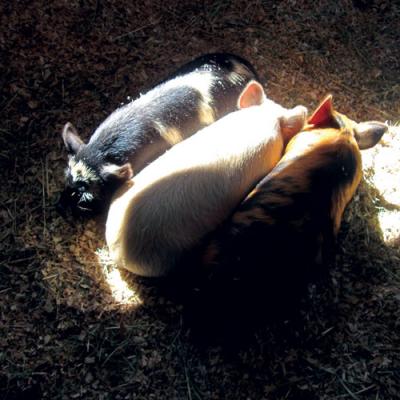 The pig named Dog has a corner pen – valuable real estate, as Crawford County Fairgrounds stalls go. Their reputation suggests otherwise, but these critters – and their stalls – are virtually spotless.

Pig coats are bristly and sparse. Each hair glows in fluorescent light beamed from the old barn's rafters. Though none of the pigs we've petted resist, Dog's gratitude is unmistakable.

"I named him Dog because he just loves to be scratched," says his owner, a teenaged boy with fresh-faced 4-H charm and a farm work-fortified frame. "Of all of the pigs I've had, he loves it the most."

He pauses to give the pig a few soothing strokes. Dog has gotten up, seemingly to survey who's loving him up, and the boy reassures him gently.

"Lie back down, Dog," he says, and the pig flops on his side, tummy exposed like a trusting puppy's. The boy reaches further over the roughhewn rail and gives Dog the belly rub he longs for.

"What a sweetie," I say, scratching Dog some more.

Dog, like the other pigs in this row, are market hogs, raised for slaughter. As if on cue, Dog gets back up and raises his snout toward us, looking us in the eye.

Don't worry. I'm not going all "How can anyone do this to such a cute animal?" on you. What each of us eats is our own business.

Besides, we had a few cows when I was growing up, whose names ended up on packages of meat in our freezer.

It seemed a little diabolical at the time, but part of me is grateful for the reality check such a practice engendered, just as I'm now grateful to the boy who's reminding us – and the mom and kids also petting Dog – that this is what ends up as dinner. And, in the case of bacon, at least, as a weirdly-celebrated hipster trend decorating too many t-shirts below Brooklyn beards.

What's troubling is how distant the rest of the fair feels from the production of food. In the dairy barn, they're handing out samples of "dairy products": tiny paper cups with three mini-pretzels poised in ranch dip.

Sure, there's milk in there. But ignoring the long line of processing it took to get that stuff out of a cow and into a tub of ranch isn't doing anyone who eats – or farms – any favors.

Nearby stands a table offering "NO FARMERS – NO FOOD" bumper stickers. How long would those stickers have to be if they told the truth about much of what we consume; if they read, "NO FARMERS, or chemical preservatives, or processing plants, or underpaid factory workers, or feedlot-raised animals, or agribusiness-friendly subsidies, or plastic packaging …"

Things aren't better throughout the midway. Stand upon stand of fried you-name-it or stuff-on-a-stick, and precious few connections between what the masses are eating and what the farmers are growing.

Things aren't better throughout the midway. Stand upon stand of fried you-name-it or stuff-on-a-stick, and precious few connections between what the masses are eating and what the farmers are growing.

No wonder we need bumper stickers to remind us.

Despite some inherently troubling aspects (tiny-caged birds, overly-spurred horses, etc.), I love fairs. At least farmers – especially young ones – still have a place to shine.

But now that it's harvest season, we have the chance to do even better by them, and by the land we love and the animals raised there. As much as possible, we can give our dollars to the farmers themselves, at the markets, stands, and fairs still active for another month or so.

That only seems fair.

Getting the Best of Valentine's Day