Local leader motions for 'getting up and doing something' 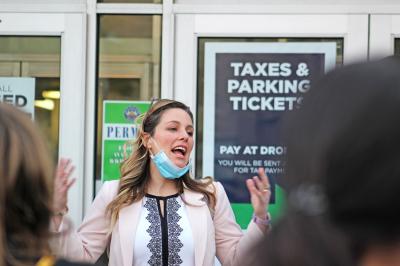 Nick Warren
Pictured here at a peaceful demonstration in downtown Erie on on June 15, Candidate for U.S. Congress Kristy Gnibus (PA-16), a mother of two and a culinary arts and nutrition teacher at McDowell Intermediate High School, will try to unseat five-term Republican incumbent Mike Kelly of Butler County in November's elections.

It seems change may soon be coming to Pennsylvania's 16th Congressional District as Democrat Kristy Gnibus is officially on the ballot to run against incumbent Congressman Mike Kelly (R) in November.

"Even though I didn't have any primary opponents … being declared the official Democratic nominee for District 16 is huge," Gnibus explained. "And I feel like the results were very promising, even though we're dealing with a pandemic. I feel with everything going on, that it was a phenomenal turnout, especially from the Democrats. And I think a huge part of that lends to the fact that we were able to do mail-in ballots."

The district, which covers all of Erie, Crawford, and Mercer counties as well as parts of Lawrence and Butler counties, has been represented by Kelly of Butler since he took office following Democrat Kathy Dahlkemper in 2011. In mid-2019, Kelly announced he would be running for his sixth two-year term.

Over the last decade, Democratic challengers have repeatedly failed to unseat Kelly. He beat Erie County's Dahlkemper by just over 20,000 votes, according to the Pennsylvania Department of State. Again, in 2018, Kelly beat out another Erie native when he won over Democratic lawyer Ron DiNicola by just over 11,000 votes.

Coming off the June primaries, however, it seems Gnibus may have a shot at taking the seat.

In the election earlier this month, Gnibus brought home 32,060 votes from Erie County compared to 20,382 votes for Kelly. Throughout the entire district, Gnibus received 63,015 votes in the primaries.

With the new systems in place for mail-in and absentee ballots in Pennsylvania — which were enacted by Act 12 in October of last year — results for the primary have been delayed, but it seems that Republican turnout outpaced Democratic turnout by over 10,000 votes.

"I think Erie has felt neglected for quite some time from our congressman," Gnibus told Erie Reader in early May. "I think that's across the district, but certainly in Erie, where [Kelly] promised lots of things," she continued. "We want to be heard as constituents, including myself, as a constituent, I want to be heard, and I want to know what his solutions are going to be, and see them brought up in Congress. What are we going to do to fix the issues? How are we going to keep Western PA and Erie's economy robust? Are you going to fight for infrastructure for this area?"

Gnibus, an Erie native, got her start in public policy at a young age. Today, her dreams of a Congressional term include using the position to fight for universal healthcare.

In regard to healthcare, Gnibus said: "Millions of Americans are now uninsured because they're unemployed and that has to stop. And so the first step is protecting what we have in place now … our ACA [Affordable Care Act]. And we have to continue to work on a plan to make sure that every single American is insured." Gnibus continued, "We can't have a robust economy and we can't be a successful nation if we do not have our health."

As a mother, teacher, and community member, education is another passion of Gnibus.

The education system in place is interesting, Gnibus said, as federal legislation strongly dictates action in schools, yet only four percent of the funding for education in the commonwealth comes from this level of government.

"I think that should be increased," Gnibus said. "And I would like to work to find out how we can equally represent districts and not tie them to their property. Because we know that where you live can determine the type of education you get. And that's segregation."

Those people include many of the 195,451 registered voters in Erie County. Because it's a presidential election year, a greater percentage of them are likelier to turn out. In the last presidential election, 62.9 percent of Erie County voters cast ballots. Just four years prior, 64.6 percent of registered voters voted (compared to a rate of 31.9 percent during an odd year like 2013).

The most recent challenger to Kelly, DiNicola, won Erie County by 19,813 votes in 2018. That midterm election that saw only a 53 percent voter turnout, but Democrats came out to pledge support for their candidate.  There will be naturally voters of both parties at the polls in 2020 — not only in Erie County, but in District 16's Republican-leaning rural territories. It's there were Gnibus will have to make up the most ground.

At home base, however, Gnibus has garnered favor — just last year, Gnibus was nominated and won a spot in the Erie Reader's 40 Under 40.

"Kristy is an influencer because her voice is real," one nominator explained. "Even more so she speaks as a strong woman who can be looked up to. She is an independent, honest voice that resonates."

Gnibus, a culinary arts and nutrition teacher at McDowell Intermediate High School in Millcreek, found her love of public policy when she was a high school student herself.

"[It] started when I got really involved with the county fair," Gnibus said. After winning Erie County Fair Queen, she traveled to Harrisburg to present her winning essay.

Her eyes were opened to the causes she felt adamant about "as my life started advancing, and having cancer, it opened my eyes to the healthcare system. [Between] raising my two girls and … getting my Ph.D. in leadership, I just remember reading stories about incredible female leaders and what they were doing to impact the world around them," Gnibus said.

Around the same time she remembers thinking, "This might be my calling, this might be what I need to do."

"And so taking my passion for my community and my life experiences over the past few years, I took some different candidate trainings and talked to different leaders in the community and I just thought, now's the time," Gnibus admitted.

The greatest hurdle to Gnibus must overcome to have her voice heard in the capitol is name recognition, she said.

"A lot of people vote and don't have all the information, and (Kelly) has the advantage of having that name recognition from being in office for so long," Gnibus said, adding, "I think raising money during an economically depressed time is going to be incredibly difficult. It's proven to be difficult. And I don't take any corporate PAC money like my opponent, so everything is truly grassroots. I'm really, really relying on people to help fund this race."

Despite these challenges, Gnibus and her campaign team "are doing everything we can to make sure that we are successful come November."

"We're done with the thoughts and prayers, and now it's time for policy change," Gnibus said. "And the only way that we're going to enact policy change is by getting up and doing something."

Polling data has been updated

Hannah McDonald can be reached at hmcdonald@eriereader.com.

by Hannah McDonald4/9/2020, 11:00 AM
Red Letter Hospitality uses efforts like their Employee Relief Day do help in difficult times

by Jim Wertz4/7/2020, 11:42 AM
Candidate for PA Auditor General, the scientist and policy-maker from Philadelphia talks to Jim Wertz