He went 3-1. If he actually cared, he?d be happy. See who Lee?s calling this week in the Locks. 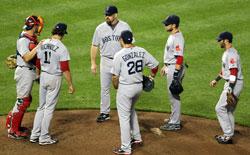 The Erie SeaWolves have completed their 2011 campaign, and although they didn?t make the playoffs, I still think the season showed some relative success.  Their 67-75 overall record is not what one generally shoots for, yet they were a respectable 38-33 at Jerry Uht Park.

The Wolves were not considered road warriors by any stretch, however, going 29-42 away from the friendly confines, and it was that, which kept them from generating enough momentum to make the postseason. The only month when they posted a positive record was June when they went 16-12 (one win was a makeup game).

Like any farm team, they were susceptible to call-ups and certain injuries, and that was really what made the Wolves vulnerable. And although many new faces from Lakeland arrived and played well, it took time for the new players to mesh.

In my opinion, first year Erie manager Chris Cron and his staff did a tremendous job of keeping the team relevant--even with all of the turnover and challenges they faced.  For example, the SeaWolves did not allow the Bowie Baysox to reach the postseason during that final stretch at their place, when they had everything to lose and Erie had nothing to gain. Bottom line: Erie didn?t quit.

The one thing about baseball in Erie is that it can be a springboard for success at the upper levels as several more players made it to parent Detroit this year.  Another thing to consider when you see changes made during a game, such as innings pitched or who comes in and who goes out are many times dictated by situations and even the parent club?s intentions.  For example, if you have a pitcher mowing down the opposition and he is pulled from a game, it may be because he?s limited to a specific number of pitches, and they will stick to that plan.  There?s a fine line between winning games and making sure that the big picture is in focus.  Many times, we as fans don?t see the logic, but there is usually a reason behind such moves.

The NFL is back.  This past weekend provided some really good matchups.  And some unexpected results as well (uh, that?s why they play the games, hello?).

I thought the biggest surprise was how the Ravens manhandled the Steelers, 35-7--although the seven turnovers committed by Pittsburgh led to their own demise. I was also surprised at how easily Buffalo (4-12 last year), dominated Kansas City (at home, mind you and 10-7 last season), by a score of 41-7.

Then we had Houston beating up on Indianapolis, who, without Peyton Manning got creamed, 34-7, and Chicago handed it to Atlanta, 30-12, which was reminiscent of the Falcons? playoff meltdown last season.

Finally Dallas basically blew it, getting beat by the NY Jets because of more errors by Tony Romo.  Did I mention that Mark Sanchez is not a very good quarterback, because he certainly is not, as the Cowboys essentially gave the game away.

And in all this you have Cleveland looking like the Browns of old falling to the lowly Bengals -- at home yet -- by 27-17.  It must be a jinx going on by the lake.

Peyton Manning?s streak of 227 NFL games started consecutively has now ended.  When the Indianapolis Colts went up against the Houston Texans, recently signed retiree Kerry Collins was under center for the Colts.  Manning may miss the entire season and may never be the same again. Hopefully, that won?t be the case because the game is better when he?s playing it.

Collins on the other hand, is going for a new record in his attempt to start at least one game for each of the 32 NFL teams.  If the game against Houston is any indication of things to come, then Indy fans are in for a very long season.

Brian Kelly ? the coach at Notre Dame ? is getting a lot of negative press for his sideline rant during their eventual loss to South Florida September 3.  The talk seems both positive and negative on Kelly, and it just depends on your perspective, but I have to ask:  Right or wrong, everyone pretty much knew what they were getting with Kelly, so how can anyone be surprised?  But the loss at Michigan does not bode well for Irish fans, especially since they fell apart in the fourth quarter when the game had virtually been decided.  Good grief!

Penn State on the other hand, never even looked competitive, falling to Alabama at University Park, 27-11, although the game didn?t ever seem that close because they got their clocks cleaned.  Joe Pa must have gone through an entire bottle of Tums watching from the coaching box upstairs.

How about Iowa State beating Iowa by 44-41?  Didn?t see that one coming.

The NBA?s (you remember them?) Denver Nuggets guard J.R. Smith is set to become a free agent and may sign to play in China.  Can you just imagine how many NBA free agents will likely sign up to play for a year or more in any of the countries that currently have basketball teams?  There are a lot of players, but there are lots of professional basketball teams world-wide.  This could be one of our first exports to China.  I?d like to know why we couldn?t export Allen Iverson to China.  Now that makes sense.

Things to keep in mind department:  No matter how well--or consequently, how poorly your favorite NFL team performed in the preseason--it has virtually no correlation concerning what happens in the regular season when the games count.  You need look no farther than the 2008 Detroit Lions to see exactly how that can work.  The Lions went 4-0 in the preseason to finish 0-16 in the regular season.  During preseason, teams rarely show you what you will get scheme and package-wise and are also basically trying to put together their roster for the season.  It?s all a charade; it?s fuddy-duddy football, people.

On Tuesday, Sept. 6 ? I had the Detroit Tigers at Cleveland Indians.  I went with the Tigers in this one and they took it easily, with a 10-1 win over the ever-vanishing Tribe.

Wednesday, I picked the Atlanta Braves over the Philadelphia Phillies, but Philadelphia swept the series, taking this game, 3-2, making a mockery of my prognostication.  Philly pretty much makes everyone else look bad.

For Thursday, I had the Cleveland Wahoos at Chicago White Sox, going with Chicago.  The Sox took it, 8-1 and have been playing pretty decent ball for Ozzy Osbourne, er, I mean Guillen.

Hey, they act a lot alike because they?re both so freaky.

Friday had the Boston Red Sox at the St. Petersburg Rays.  The Rays have cooled off, but the Sox are colder, so I went with the Rays who took care of the drooping Sox by a count of 7-2.

For the week, I went 3-1, which is satisfactory at best.  If I actually cared, I?d be happy.

I?m sticking with baseball as the season winds down and the postseason cranks up.

Tuesday, Sept. 13 has Toronto at Boston.  The Blue Jays have been hanging around the .500 mark and have been playing respectably even though they?ll be watching the playoffs on TV.  The Red Sox have yet to turn it on and resemble a team in distress.  It would not surprise me to see either St. Petersburg or Los Angeles wrestle the Wild Card away from the less-than-exciting Sox.  Taking Toronto to add to the pain in this one.

On Wednesday, let?s take a look at Detroit at the Chicago White Sox.  The Sox are just about an afterthought, but I?m still thinking that they believe they?re right in the thick of it, having not seen the standings.  Picking Chicago to take this one from the visiting Tigers.

For Thursday, we?ll bounce over to the NL and go with San Francisco at Colorado.  The Rockies are out of the picture and the Giants seem headed there, but ?it ain?t over till it?s over?, so I?m going with San Fran in this one, attempting to stay relevant, at least in their own minds.

Then on Friday, we?ll check out St. Petersburg at Boston as last week, it was the reverse.  Oh, baby, this has got to be good ? both teams fighting for a Wild Card, although Boston still clings to the dream of the top spot in the AL East, they?ll be lucky to just get in.  Picking the Red Sox to emerge victorious after seeing the morning paper declaring them also-ran?s and overpaid sophomoric goofballs.

I don?t get involved with fantasy football and frankly don?t even think about it.  My feeling is, if I were to worry primarily about individual player statistics ? as that entire venue depends ? then I would lose sight of the team effort, and therefore, lose the excitement of the games themselves.  When you have fantasy teams, the only thing that?s important is how a player on your team performs and consequently how badly some star on an opposing team performs, so that you can beat them.  I know that it gets more people into the games, but I argue that it completely dilutes what is happening on the scoreboard and that?s where my disconnect lies.  I am not into Twitter, Facebook, and fantasy football, in no particular order and couldn?t care less if every one of those things fell off the face of the earth this very day.   I?d rather watch paint dry.

Feel free to berate me for that item.

Justin Verlander + 22-5 (W-L) + 2.44 (ERA) = Cy Young Award.  He?ll walk away with it, but how about American League MVP?  It?s not an award that pitchers receive because it typically goes to hitters with mind-boggling home run and RBI numbers.  Having said that, please tell me the one player on any team that has made any more impact during this season?  That player is Verlander, and I can?t see a solitary reason why he won?t get it, and if he doesn?t, the award is nothing more than a glam-sham.

Hit ?em where they live category:

Former Charger and Patriot Safety Rodney Harrison, who now works at NBC, had an interesting comment recently about his former New England team regarding rushing the passer.  It went something like this: ?I don?t think the Patriots have had a pass rush the last couple of years.  I mean, when you get to a point last year when you depended on Tully Banta-Cain to be your primary pass rusher, I don?t think that pass rushing is that big of a concern for you.?

Same old Rodney, telling it like it is.  Maybe that?s why the defensive line looks completely different from last year.  It?s been said that ?defense wins championships? and let?s face it, that?s the only reason why Eli Manning has a championship ring because he?s basically a marginal quarterback at best.  In reality, he stinks.

Lastly, we lost a great guy on Sunday.  Family friend Ed Donovan of Leesburg, Fla. lost a valiant battle and we will not ever forget him or his courageous and contagious spirit.