Lee's back and he's talking football and baseball in this week's Locks. 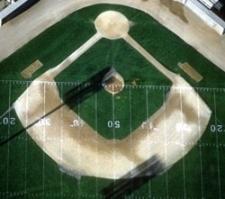 The Observation Deck:
I'm not going to pile on Penn State University in light of the tragic situation unfolding now at University Park, especially when you can't turn on a television or bring up a webpage without seeing more about it.  Penn State has been and will be a great university, and the horrible actions of one person and lack of action by others can't really change that.  These are dark days in Happy Valley, however, and my thoughts continue to be with the victims and their families.  Many had an opportunity, certainly an obligation to do something, but unfortunately, no one did or did enough.  That's part of the tragedy.

Not totally surprising because of the seriousness of the situation, 46-year Penn State coaching legend Joe Paterno has been fired by the university, which sparked hours of rioting in State College on Wednesday.  He has a record 409 career wins with the only school he's ever coached, for and assistant Tom Bradley will take over on an interim basis.  Along with Paterno, University President Graham Spanier was also let go, and if you remember, Spanier was once employed at the local Penn State--The Behrend College.  With the federal government now included in the investigation, the school had to make sure than anyone who was either involved or had knowledge of the events had to be removed and no one would be spared.  Jerry Sandusky may have been the criminal, but there were many who clearly not only failed the victims of Sandusky's despicable activities but the university and the community as well.  It truly is an end to an era if not also the innocence.

In the NFL, the San Diego Chargers are 4-5 after losing four games in a row.  It's not just the losses, but the way they've lost that's concerning.  Normally, Phillip Rivers is the best player on the team, but he's actually been one of the biggest problems.  Against Green Bay last Sunday, Rivers tossed three interceptions, with two of them being returned for touchdowns by the Packers.  On Thursday, Oakland was in town and beat them 24-17--although it could have been worse, with the Raiders up 17-3 with 293 total yards to the Chargers 65 at halftime.  Luckily, with the way the rest of the AFC West is playing, it looks like no one wants to win the division, so the Chargers are surprisingly still in it.  You still have to wonder if Coach Norv Turner and GM A. J. Smith will be around much longer because things don't seem to be getting any better.

The New England Patriots have released DL Albert Haynesworth with three tackles (two solo) in the six games that he played with the team.  After a remarkable career in Tennessee, Haynesworth signed a $100 million contract with the Redskins where he completely flopped and was traded to the Pats for a fifth round draft pick in 2013.  There, he had an opportunity to turn around his career and change perceptions but was unable/unwilling to do so.  His last game with New England was against the Giants where he was basically thrown around like a rag doll by the G-Men's offensive line and was subsequently benched.  The man basically has a lot of talent but no drive and obviously, no shame.  It appears that Tampa Bay will take a chance on him (and his $700,000 remaining salary for 2011), thinking that maybe they can get him engaged.

Note to Tampa Bay:  When you have players that are unwilling to play, the only thing that may change is the team they suit up for.

On the NBA season, we have, uh, what season?  The players rejected the latest proposal and will continue meeting with the owners, but no end to the stalemate is in sight.  Get ready for nothing.  Commissioner David Stern is hopeful a deal can still be reached and the season could commence by mid-December.  Wonder what he's smoking?

The Luck Contest:
With Stanford QB Andrew Luck likely to go with the first pick in the 2011 NFL Draft, we're keeping tabs on who is presently qualifying for that key position and likewise, the rights to select what many claim is to be the best quarterback prospect in the last decade, if not the last couple of centuries.

Not every team would necessarily be looking for a quarterback, but this list has nothing to do with need and everything to do with what place you're in.  You can always trade your spot (or your current hotshot QB), if that's how you choose to go.  We've got some new additions as everyone is obviously excited to be in this prestigious race.

Recap:
My first game was the New Orleans Saints at Tampa Bay Bucs and going with the Saints, I was rewarded in my confidence, as they prevailed 27-16.

Next, we had the hated New York Jets visiting the Buffalo Bills, and going with Buffalo, I took a hit when the Jets won decisively 27-11.

The game that I went way out on limb for, picking San Diego over unbeaten Green Bay proved a bad choice because Phillip Rivers' three interceptions (two for TDs) cost his team any chance of winning, as they were dropped by a 45-38 mark.   The other story is that Green Bay's defense is not looking very super lately.

I then picked New England at home over the New York Giants, and although it looked like another New England climatic finish when Brady drove the length of the field, hitting TE Ron Gronkowski for what appeared to be the winning score. But the Giants got the ball and scored again with 15 seconds remaining to snatch the game from under the Pats 24-20.  It reminded me eerily of 2007 when the Giants won the Super Bowl in the final minute, and I immediately had chills and the shakes and almost couldn't finish my beer.

My last pick was going with Pittsburgh at home to beat the Ravens and that game was also won in the final minute, but by Baltimore, 23-20.  This loss puts Pittsburgh in a poor position to win the AFC North since the Ravens took both games from them this year.  Baltimore would win the tie-breaker.

The picks left me a truly horrible 1-4 for the week.  That is pretty much despicable, and my mother could do better and now that I think about it, I should have her make the picks for me.

The Picks:
Let's give the NFL another go this week since I'm such a glutton for punishment, and no, my mother isn't in on this.  Not yet.

The first one is Jacksonville (2-6) at Indianapolis (0-9), and I'm going out on another limb by picking the Colts to win their first game of the season.  I can't see this team going 0-16, and this looks like their best bet at ending their losing streak because the Jaguars are kind of freaky.

Next, we have Buffalo (5-3) at Dallas (4-4) and an important out-of-division game for both teams.  I'm going with Dallas to further derail the Bill's dream season and give Buffalo a dose of reality.  Ryan Fitzpatrick has seemingly come back to earth.

Let's take another chance and look at the fading Washington Redskins (3-5) visiting the Miami Dolphins (1-7).  Miami beat Kansas City soundly last week for its very first win of 2011, so I'm riding the 'hot hand' and taking Miami again.  Washington QB John Beck returns to the take on the team that drafted him, and it won't be a happy homecoming.  It's crazy to pick a one-win team to take two in a row, but hey, I'm kind of crazy.

We have the Pittsburgh Steelers (6-3) at the Cincinnati Bengals (6-2) with a lot on the line for both teams.  The Steelers can't afford another division loss and the Bengals can take aim at the top spot with a win.  The Steelers played the Ravens well enough to win, but allowed Joe Flacco to look like Tom Brady, and if they do the same with Andy Dalton, then they will lose again.  Cincinnati has a very good defense, but so does Pittsburgh, so I'm going with the visiting Steelers.

We can't avoid the AFC East and that all-important matchup at the Meadowlands between New England and the detested New York Jets.  Although the Patriots have never lost three in a row under Belichick, I'm back and forth about who will win.  Logic says the Jets are playing better and should have no problem handling this New England team with the division title on the line. There is no way that the Patriots can possibly win this game, so that's why I'm going with them.

Note:  I have the luxury of not caring how I fare with my picks, and did I mention that I hate cupcakes?

And another thing:
Keeping up with RB Chris Johnson, I remain somewhat baffled at his productivity (loose definition, here) since recently signing a new BIG money contract.  Johnson, as you may remember, essentially held the Tennessee Titans hostage in the offseason and wouldn't report to camp until his existing contract was renegotiated.  From 2008 – his rookie year -- to 2010, Johnson annually averaged 11.3 touchdowns at a clip of 4.8 yards per carry, yet in eight games this season he has 121 carries for 366 yards and a dismal 3.0 yards per carry with only one touchdown.  Those numbers stink, and when you watch him, you can't believe it's the same player because he can't hit the hole, doesn't follow his blockers, can't make anyone miss, and seems to have lost his burst.  I'm thinking that it's because he's loaded down by his checkbook, which must be extremely heavy to the extent that he's essentially lost his ability to run.   Contracts contain guaranteed money for the player, but there's nothing guaranteed to the team, so this could be constituted as a robbery, and if you needed evidence, just whip out any Titan's game film and even Casey Anthony's jury finds him guilty.

Far out:
Famous winter Olympics star and the most decorated U.S. winter Olympian ever at the 2010 Winter Olympics, American Apolo Ohno recently completed the New York City Marathon in 3 hours, 25 minutes and 14 seconds.  The significance of this being is that sports' stars who are non-marathoners typically don't fair very well in such a grueling and exhausting event.  Pat Tillman, who was a starting safety for the NFL's Arizona Cardinals and who loved a challenge, later becoming a national hero when he left the NFL, joined the Army and later lost his life for his country in Afghanistan, wanted to cross train and decided to try running a marathon and said it was one of the toughest things he's ever done.  Tillman ran the Avenue of the Giants Marathon in 2000 in 3 hours, 48 minutes.  For comparison sake, former Steeler Lynn Swann ran the NYC Marathon in 1993 in 4 hours and 26 minutes.  I now have a newfound appreciation for the event.

You heard it here:
Who will be the head coach for Penn State football going forward?  Former defensive coordinator Tom Bradley takes over on an interim basis, but it's hard to believe that he would be named the permanent coach of the team.  Bradley, you see, was part of the old regime and was actually the secondary coach under former defensive coordinator Jerry Sandusky, and although he may not be involved in any way, you could expect the university to start with a clean slate.  Who could follow Joe Paterno?  Want to put the past in the past and instill instant credibility -- then how about Urban Meyer?  He's got the resume, and he's likely the hottest college coaching candidate available, so it just makes sense.

A Virtual Walk with Old Erie On Foot