Lee's back from vacation and he's calling more games. See who he likes in this week's Locks. 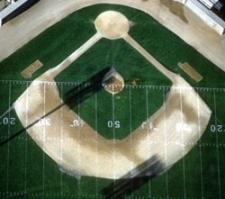 The Observation Deck:
Just back from vacation and I realize that I've been seriously lacking in that I haven't provided any help for those of you who have difficulty falling asleep at the end of a busy day.  In other words, I know that if nothing else, this column provides much needed relief for insomniacs and those that just may need a little help drifting off at night.  Well, the wait is over, so let's get started -- zzzzzzzzzzzzz.

Congratulations to the St. Louis Cardinals in their World Series championship quest.  We saw most of the games and marveled in particular at the amazing game six where St. Louis came back three times to win it in extra innings and even the series at three games apiece at that point.  You could almost feel that the Texas Rangers were defeated then and the eventual game seven outcome was only a formality.  For the record, that's two Series' trips for Texas and two Series' losses in a row.  What a total bummer.

In the new NFL season, we've had a number of surprises with the typical perennial losers now challenging for the top spots in their divisions or working on at least a Wild Card bid.  Teams like Buffalo, Cincinnati, San Francisco, and Detroit have ignited their respective fan base and completely changed the outlook for the previously reigning heavyweights.  Things eventually change and we're seeing that happen right now and it's been completely refreshing.

Carson Palmer has now landed in Oakland from Cincinnati.  In a lot of ways, this makes perfect sense, and with the willy-nilly AFC West, the Raiders could realistically make the playoffs.  Did I just say that?

Looking at former holdout running back Chris Johnson, who robbed/ ripped off/ scammed Tennessee for a huge contract, is still averaging well under 3.0 yards per carry after eight games.  I wonder if the Titans are having any regrets on that contract today since he's been basically well below average in production and there's no sign of regaining the form that led to the holdout and subsequent contract re-negotiation in the first place.  He took the money and ran, just not between the goal posts, but to the bank.

In the NHL, we have many teams off to rather sluggish (read: crappy) starts, but it must be the Stanley Cup champion Boston Bruins who have their semi-loopy fans scratching their collective little heads.  The Bruins are currently mired in last place in the Northeast Division (dead last in the Eastern Conference), much to the chagrin of the Boston faithful.  I'll have another Sam Adam's, please.

The Luck Contest:
With Stanford QB Andrew Luck likely to go with the first pick in the 2011 NFL Draft, we're keeping tabs on who is presently qualifying for that prime position and likewise, the rights to select what many claim is to be the best quarterback prospect in the last decade, if not longer.

Not every team would necessarily be looking for a quarterback, but this list has nothing to do with need and everything to do with placement.  You can always trade your spot (or your current hotshot QB), if that's how you choose to go.  As you can see, the field is really thinning out.

You could envision the Colts taking Luck with the first pick and then deciding whether to keep Peyton Manning.  As far as contracts go, the rookie wage scale is much lower now, and Manning has some big numbers, and when you also consider the upside, the rookie Luck has longevity in his favor.  They could potentially coexist.

The Picks:
Now let's say we go with NFL football, and there are some truly awesome match ups this weekend.

New Orleans (5-3) at Tampa Bay (4-3).  The Buccaneers are coming off a bye week while the Saints are coming off a nasty loss at previously winless St. Louis.  I'm going to say that whoever wins this game will go on to win the NFC South with the other potentially missing the postseason.  Picking New Orleans to get this one on the road.

New York Jets (4-3) at Buffalo (5-2).  Now this one has all kinds of implications, and Buffalo just tossed a shutout of Washington in Toronto while the Jets were off golfing or breaking various local ordinances last week.  Although my head completely says to pick New York, I'm going with Buffalo to prove they're for real.

New York Giants (5-2) at New England (5-2).  This one has some bad karma and some bad defense, with Eli Manning possibly picking apart a porous Patriots' secondary, but New England usually won't drop two in a row, and I'm taking them at home at the Razor because Sir Hoody will be in an ugly mood after last week's pasting.

Baltimore (5-2) at Pittsburgh (6-2).  Now this could go either way because although the Steelers are at home, the Ravens toasted them in an embarrassing fashion in the first week and that wasn't at all very nice of them.  Pittsburgh can't lose this one with the Bengals up next, and Joe Flacco will certainly not ever be confused with Tom Brady, so I'm going with the Steelers on Sunday night, even with Raven's LB Terrell Suggs running his mouth all week.

Note:  I have the luxury of not caring how I fare with my picks and did I mention that I hate cupcakes?

And another thing:
We saw the Pittsburgh Steelers impose their will on the New England Patriots this past Sunday at the ketchup bottle with a 25-17 victory that wasn't even that close.

A good win for the Steelers, but a closer look tells us more than what we likely want to know.  The Patriots are struggling right now, and it's evident that the problems that were exposed in last year's playoff loss are still very much a reality.  They give up yards – lots of them -- as their No. 32-rated defense can attest, and if you can pressure Tom Brady enough, you can usually beat them.  They are dangerous in Foxboro but can be had on the road.  The Chad Ochocinco experiment is a distinct flop, and he had just as many catches as Randy Moss did on Sunday (uh, zero) and has anyone seen Albert Haynesworth?

Pittsburgh, meanwhile, is marginally above average.  Ben Roethlisberger is admittedly playing some of his best football, but they have too many injuries right now to dominate anyone.  Yes, they have a 6-2 record, but those wins were against teams that are not very good or have serious flaws, while the two losses were against equally average teams (Baltimore and Houston).  In the game against New England, they made four trips inside the red zone to only come away with field goals each time against a Patriots defense with way too many holes, and that is simply not very good.

The Sunday night game against the Ravens will help to decide the AFC North, but it's the Bengals that could challenge the status quo and be a thorn in the side of both current division leaders.

Speaking of which, Pittsburgh gets to travel to Cincinnati the following weekend.  In two weeks, you'll know what you've got.

Far out:
It wouldn't be an unusual offseason if we didn't have to consider the Erie SeaWolves potential move to another city.  According to several quoted sources, the city of Ottawa, Canada is eagerly seeking a double-A baseball franchise for the 2013 season, and although several Eastern League teams are in the discussion, this Erie team could be in play as well.  The 'Wolves contract with the ballpark is up coincidentally in 2012, as is their current agreement with parent club Detroit.

It's no secret that game attendance and community support will always be a major concern for any franchise and Erie is no different in this regard.  I also know that Darryl Murphy, who is the director of business development for the club, has some exciting ideas to reach out to the community and generate additional interest in the team.

Having the SeaWolves depart the premises would be a tragedy for the region that could never be undone.  I obviously can't speak for anyone else, but you can count on us to attend as many ballgames as possible and support the team in any other way that we can.  There's nothing quite like a summer evening watching baseball in the beautiful ballpark on 10th and French, I can tell you that.

Those same Erie SeaWolves have an official booster club and they can be contacted by visiting their website at: http://www.swboosters.com/.  We've been members for a couple of years now, and they have a great way of staying involved with the organization and the fans.

You heard it here:
Want to know who the best team in the AFC East is today?  It's none other than the Buffalo Bills, currently tied for first place at 5-2.  They also hold the tie-breaker edge over New England, having surprisingly defeated them earlier this season in Orchard Park.

The 4-3 New York Jets will visit Buffalo on Sunday and if the Bills win, they could control their own destiny in that division.  Fred Jackson is quietly becoming one of the best running backs in the NFL and their defense can get to QB Mark Sanchez, making him look exactly like the error-prone marginal quarterback that he truly is.  I just think the guy is a hack and kills his team every other week, at the minimum.