A Northeast Ohio native has created Fifty Years of Tears, a calendar documenting something bad that happened in Cleveland sports for each day. 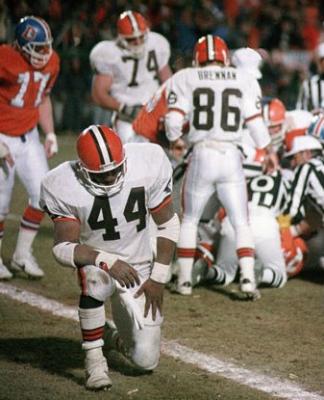 Day-to-day calendars have all sorts of themes, from old Dilbert cartoons to inspiational sayings. Phil Brett has something much more depressing in mind for his date tracker. The Northeast Ohio native has created a project entitled Fifty Years of Tears, where Brett has managed to compile enough horrifying events over the course of Cleveland sports history to fill an entire calendar.

A couple of weeks ago, I wrote a little post about entitled "An Anniversary of Agony" about the 50th anniversary of Cleveland's last major sports championship. One astute reader noticed that I had added a "Murphy's Law" tag to the aforementioned article, because, as a depressingly loyal Clevealnd sports fan, that has always been an apropo motto (for those less pessimistic, Murphy's Law is an adage stating "Anything that can go wrong, will go wrong"). Thanks to Brett, we now have the beginnings of a calendar to support this unfortunate epigram.

Brett came up with the idea during a poker game with a few friends when they were discussing the anniversary of the 1964 NFL Championship and the horrifying events for Cleveland sports fans in the decades that followed (The Drive, The Fumble, The Shot, The Move, etc.), and Brett stated that you could likely find something awful that happened for every day of the calendar year. It turns out he did, thus the creation of Fifty Years of Tears.

The daily calendar started Dec. 27, 2014 with what will likely be is only happy entry - the 1964 NFL Championship. Brett has since published a new post a day, including today's entry detailing how one-time Indians GM Gabe Paul essentially traded himself to the New York Yankees in 1973. Fifty Years of Tears is only online now, but Brett has started a Kickstarter campaign to raise funds for the rights to use certain notable headlines from different papers or even commission some local artists to draw their own versions of specific events and perhaps even get it into the Cleveland Museum of Art.

Constantly being reminded of misery isn't exactly something people enjoy, but it's a way of life for Cleveland sports fans. You might as well laugh about it, so I'll leave you with Mike Polk, Jr.'s slightly NSFW "Factory of Sadness."