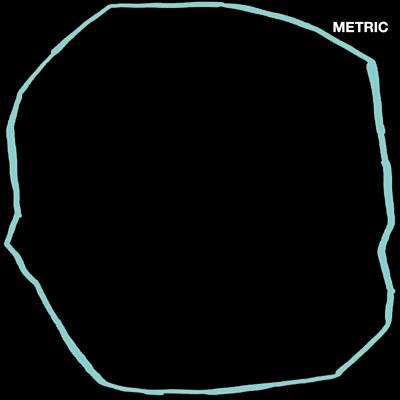 Some bands just refuse to fade away. Toronto's Metric, led by the relentlessly relevant Emily Haines, is one of those rare bands who have been able to reinvent themselves just enough album by album, each time rich with credibility, grace, and intelligence. The quartet, at the very least, deserves to be every American's 10th-favorite-band (though they happen to be this reviewer's 14th favorite, according to Last.fm). Fervently relished by fans yet forgotten here in the states, their catalog offers enough variety and relative consistency to be worthy of canonization for any aging indie kid. Art of Doubt continues to take a turn, a further uptick in dance-rock stylings, inching further away from the synth-reliant sounds of 2012's Synthetica (and its two accompanying releases), planting this release more in the territory of 2009's Fantasies. The vaguely disco beats and anthemic instrumental swells are working overtime, all in conjunction with Haines' breathy vocals and biting lyrics that Broken Social Scene fans will know well. For longtime followers of the band, this album must be heard. For newcomers to the group, it's a fair point of entry to a band whose output is nothing short of amazing. — Nick Warren