The Showtime ensemble comedy is charming albeit stakeless

by Nick Warren
View ProfileTwitterInstagramRSS Feed
November 18, 2020 at 9:15 AM 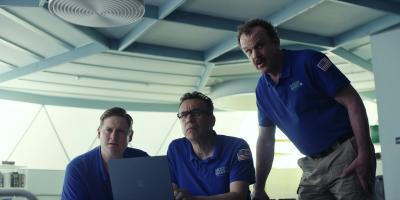 Moonbase 8 is a frustrating show. You really want it to be better, and for moments, it is. The elevator pitch is simple: Three astronauts are stationed at a terrestrial training center prior to going to the Moon. Who are those astronauts, you ask? Why John C. Reilly, Tim Heidecker, and Fred Armisen. That should bring enough quirky comedic chops to turn any mild rations into a full-course meal, right?

For such a high concept show, it's remarkably low concept — and surprisingly low-budget — in its final form. The show moves at a slow pace, floating through the atmosphere and making the occasional joke.

Reilly portrays Robert "Cap" Caputo, the NASA officer technically in charge. Heidecker plays things straight as an arrow, as Scott "Rook" Sloan, the white-bread Christian professor, while Armisen is Michael "Skip" Henai, a doctor trying to live up to his legendary father's astral footsteps. All three characters could be called Beta males, as their roles of lower-tier astronauts forever at the end of a lunar waiting list becomes more and more evident to the audience and to themselves.

Ultimately, Moonbase 8 suffers the fate that countless modern-day series are plagued by: It should have just been a movie. Thankfully, with an order of just six episodes at a half-hour apiece, it basically is. Each episode is directed by series co-creator Jonathan Krisel, who helmed the lion's share of Portlandia episodes and the entire run of Baskets. Krisel does a stellar job as an indie comedy director, though sometimes such subtlety gets lost if one is expecting a more slapstick and broad appeal. The show is littered with physical performances, chiefly from Reilly, while Heidecker and Armisen remain relatively reserved. There are laugh-out-loud moments (chiefly with episode four, "Visitors"), but nothing too profound or unforgettable. That being said, it's warm and easy to watch. If you have a lazy afternoon to spare, and you're a fan of one (or all) of these actors, bundle up with some Tang and beef-style stew, because it's worth checking out at such a low buy-in. If not, move along. — Nick Warren