Education should be accessible for all 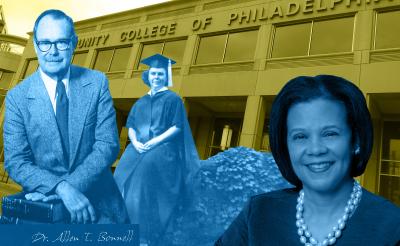 The Brady Bunch's Alice vs. Rocky.

But despite those differences, and in a happy outcome by decision-makers, the leader of the new Erie County Community College comes from the Community College of Philadelphia, founded by a one-time latchkey kid from Erie.

Judith Gay, Ph.D., will serve as interim president of the Erie County Community College while the search continues for a permanent president.

In 1962, Bonnell, then vice president at Drexel University, headed the research effort that led to a proposal to establish a community college in Philadelphia. He became the founding president of the college when it opened in 1965 and served in that role until he retired in 1983. He held the title of president emeritus until his death in 2013.

Gay, who joined the Community College of Philadelphia in 2000 after high-level positions at Montgomery County Community College and Chestnut Hill College in Philadelphia, remembers how Bonnell always made sure to attend the pinning ceremony for nurses graduating from CCP. "He came in a wheelchair," she recalled in a phone interview. "The nursing program meant a lot to him."

Bonnell's role in founding the Community College of Philadelphia and in advocating to break down barriers to higher education is celebrated in the City of Brotherly Love, but his story is not so well-known in Erie.

I learned about Bonnell's Erie roots and his commitment to making education accessible to all in 2008, when I met Patty Wellington. A former teacher, GE draftsman, toy company manager, and garden-center worker, the 77-year-old Wellington, of Millcreek, is also the keeper of her family's genealogy. Her husband Bob's father and Bonnell's father were first cousins.

Wellington explained that Bonnell, who was 96 at that time, wrote lengthy letters every week, either from Philadelphia or from the family's summer home in Cape Cod, to his sister Jeanette, 97, who resided in an assisted living facility in Erie.

Wellington regularly visited cousin Jeanette, a retired school librarian who had suffered a stroke, to help her with everyday tasks and to read aloud Bonnell's letters.

Wellington saved all the letters, written between 2006 and 2010, when Jeanette died, and indexed them because of the rich family and Erie history they contained. Because of her meticulous record-keeping, she can easily find Bonnell's reminiscences about the East 19th Street neighborhood known as Hogan's Alley where the Bonnell family lived, next to the railroad tracks. She can track down Bonnell's memories of his grammar school, Garfield Elementary; his high school, Academy; and his scholarship years at Oberlin College in Ohio.

When I interviewed Bonnell by phone in 2008 for my newspaper column, his sharp mind and quick recall impressed me. After he died in 2013, at age 101, I wrote about him again, noting that the Community College of Philadelphia had created the Allen T. Bonnell Award for Community Service to honor people who open up educational opportunities for others.

Bonnell's desire to learn as much as possible started at a young age. He and his sister were born in the Panama Canal Zone, where their father, a construction worker, contracted an illness — likely malaria, Wellington said. "As a result of the time spent there, [the father] had difficulty holding a job later when he got back to Erie," she told me recently. "He had health issues and wasn't able to work full-time, so their mother went to work at Halle's [Department Store]. She made hats. Because she was working and their father was ill or not there, they were latchkey children."

In one letter, Bonnell recalled how he and his sister were busy "raising each other up" in childhood, after their mom went back to work. "This meant we came home to an empty house with no welcoming cups of cocoa and snacks and hugs. I can't remember ever bringing friends home with us. We had to create our own amusements," he wrote.

Their household had few books. "We had no shelf of the classics. The closest we came to any of the standard English poets and authors were two big volumes of verse and moral essays … Horatio Alger was well-represented. … Best of all were several volumes of the Bobbsey Twins. Their thrilling, often pastoral adventures you read to me in front of a roaring fire of the Isinglass gas stove."

Rummaging through old trunks in the attic, Bonnell found his great-grandfather's violin. "The instrument was strung with heavy gut strings and was accompanied by an old, balding, three-quarter size bow and a piece of rosin," he wrote. "A feeling of kinship with the violin provided the only motivation I needed. By trial and error, I taught myself the rudiments of violin playing and could saw out simple tunes."

Bonnell also used an original string from the violin to repair a tennis racquet that he also found in the attic.

Yet he always chose to credit other people and places for the direction his life took.

"What a privilege it was, Hogan's Alley notwithstanding, to grow up in a city that was located on beautiful Lake Erie," he wrote in one letter. At Academy High School, he understood that he and his sister would be mingling with students from "a wide variety of communities," he wrote. "Did we, you and I, instinctively feel that we had to prove that we were just as good as they were despite our habitat on the wrong side of the tracks?"

Erie's public school system shaped him, he said. "I sensed from the moment I crossed the threshold of Academy that there was something there that I needed and wanted — a loaded smorgasbord of new challenges and opportunities far more interesting and exciting than those of Garfield Grammar and Hogan's Alley. I ate my way down the full length of that smorgasbord and never experienced a jaded appetite or intellectual indigestion," he wrote.

Public service was part of his character. After he met his future wife, Dorothy, at the University of Illinois, he became a Quaker, like her. During World War II, they served with a Quaker organization in France to help Jewish refugees, Wellington said. Bonnell's wife, a children's book author, later wrote a young adult book, Passport to Freedom, based on a true story about an American student trapped in France when the Nazis marched on Paris.

In 2016, the Community College of Philadelphia started its Institute for Community Engagement and Civic Leadership to promote "volunteerism, service-learning, scholarship and research, and community partnerships," according to the college's website, ccp.edu. A free course on "know your government" proved so popular this semester that enrollment had to be capped at 200, she said. "Because of things that have happened, there's a whole conversation about democracy and how it works," she said.

There are many attributes of the community college experience that appeal to Gay. She earned her bachelor's degree at Findlay College and her master's and Ph.D. at Bowling Green State University, but she has been interested in the Community College of Philadelphia since she was 14.

"My best friend and I took the subway from our girls' high school to see what it would look like," she said. "Somewhere along the line, I started keeping a file about the Community College of Philadelphia. The whole idea of open access, of starting people where they are and moving them to the next level, really impressed me — the idea that there would be a college open to everyone, and who would want you to start wherever you need to start and help you get to another level," she said.

In the Erie Times-News story about Gay being named interim president, she said the diverse makeup of the Erie County Community College Board impressed her.

The chance to be immersed in a more diverse world also drew her to Montgomery County Community College from Chestnut Hill College.

"I made a very conscious decision to take the job at Montgomery County Community College," she said. "When I told some of my friends that Montgomery had offered me the position and I turned down other opportunities, they said, 'You are supposed to be moving up,'" she recalled. "I don't think of it that way. I loved the fact that it was different than what I did before," she said. "For a person who believes in diverse experiences, I thought I would learn a lot in that kind of environment."

A community college doesn't just improve the lives of its students, she said. Faculty learn from the "very interesting experiences" and stories that students share about themselves.

Families gain, too. CCP offered an English as a second language program and adult basic education, but the number of those students who went on to other college programs was "really low," she said. "Why are they doing that program if they are not even going to come into the college?" she was asked.

But someone who took an ESL or basic education class had good reasons, she said. "They wanted to be able to talk to their kids' doctors, communicate with their teachers," These adults might not further their college education "but their children probably would."

A community college has other positive social impacts. Incomes go up. Graduates have more knowledge about health issues. Their communication skills improve.

"You have to think about the impact on society not just for today, but what is the future you are building for the community?" she said. "It's a holistic community way of thinking about things," said Gay. Observing Pennsylvania's rules about travel and social distancing due to the pandemic, she is working in Philadelphia. "I'm following the science. I am hoping that by March I will be able to come and spend some time (in Erie)."

During our phone interview in 2008, Bonnell credited his sister with fostering his lifelong connection to the Erie community. "(Jeanette) never let me leave Erie. She provided what I would call a flexible umbilical cord. No matter where I was, she would clip articles and comic strips out of the Erie papers and periodically would send me a great big bundle of those clippings," he told me.

The scrappy kid from the 400 block of East 19th Street in Erie was still thinking about the community he loved late in life, said Wellington. "It was Allen's dying wish that Erie would have a community college, too, because he knew what a need there was when he was growing up here, growing up poor."

Liz Allen has been writing about Erie's long push for a community college for years. You can reach her at lizallenerie@gmail.com.