No Charges Brought Against Officer for May 30 Violence 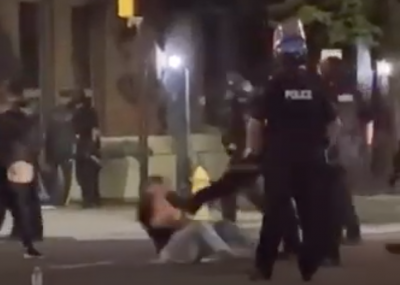 On Thursday, July 9, Erie County District Attorney Jack Daneri detailed in a statement to the press that no charges would be brought against the still-unnamed Erie Police Department officer responsible for kicking protester Hannah Silbaugh on May 30. "I consider the actions of the officer in question do not warrant criminal prosecution," Daneri said at the end of his statement.

The moment was captured on video, and widely circulated around the globe, with over 212,000 views on the original Facebook post. It shows an officer kicking 21-year-old Hannah Silbaugh to the ground, or in the words of Erie Chief of Police Dan Spizarny, "using his foot to push a protestor."

The officer was given a three-day suspension, announced by Mayor Joe Schember on June 15, and was put on desk duty until completing sensitivity training.

Silbaugh will also not be charged in these incidences, Daneri noted at the top of his statement. "In addition to miss Silbaugh, the Erie police – through videos – have identified proximately 30 individuals who were in violation of Section 5502 for failure to disperse."

This does not include the individuals already arrested [presumedly those such as Tyvarh Nicholson and Melquan Barnett] who, in Daneri's words "have committed much more egregious offenses and they've been charged accordingly."

Some of them – in particular Vanduzer – fit in with what Daneri described as "what I consider lower-tier offenders misdemeanors of the second degree, individuals who we have no evidence that they were physically doing anything violent, other than verbally and physically sitting there."

Daneri stated that based on his conversations with Spizarny, the decision not to prosecute many of the protesters was "in the interest of moving forward in this matter," and that the officer's actions were "necessary to clear the street in order for the Bearcat, and the line of police to move forward to get to the violent individuals."