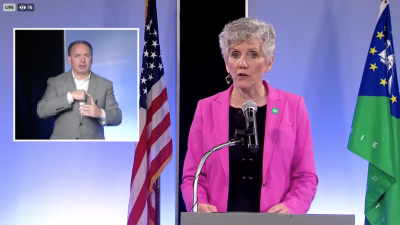 With no new cases in Erie County today, Erie County Executive Kathy Dahlkemper began with encouraging numbers from Erie County, noting that despite its size at the 15th largest county in the Commonwealth, Erie's total cases were significantly lower than that of other counties.

Via livestream, she urged that though these facts were superficially optimistic, county residents should continue practicing social distancing as they have been in order to continue this trend. "The easiest way to spread COVID-19 is person-to-person," Dahlkemper wagered. 496 negative cases were reported.

James Grunke, President and CEO of the Erie Regional Chamber and Growth Partnership – online at eriepa.com – also addressed county residents. He spoke of the Chamber's outreach team, who have gathered data in order to help assist local businesses as they navigate this crisis, helping them to secure capital and track legislative developments.

"Tough decisions must be made," Grunke admitted. He urged businesses to take this time to think about their futures. "With each new challenge comes opportunity," he argued, saying that  "now is the time to be innovative."

Upon news of churches that were still holding services, Dahlkemper noted that several calls were made and that the majority of places of worship had been compliant. Bishop Dwane Brock of the Victory Christian Center in Erie was one of the notable church leaders still planning on holding in-person services.

With enforcement teams on-site at Wabtec on March 31, Dahlkemper cited that the teams' notes were well-received by management. Dahlkemper expressed concern to Governor Wolf about Wabtec's ongoing operations at the former GE Transportation location in the form of a recent letter. She plans to have the enforcement team revisit the site frequently in the coming weeks.

Though landscaping businesses were on the list of businesses still in operation, Dahlkemper acknowledged her personal connection with this, mentioning her husband's Dahlkemper Landscape Architects & Contractors.

Special thanks to WQLN media for facilitating these ongoing livestreams.

Nick Warren can be reached at nick@eriereader.com.