Occupied: The Past Tense of #Occupy

Three years after Occupy Wall Street began, what do we have to show for it? 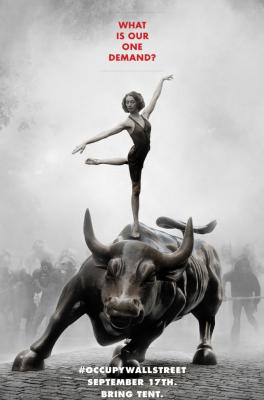 On September 17, 2011, approximately 1,000 people gathered in New York City to march on Wall Street. Whether they knew it or not, these protestors began what ended up being one of the most memorable social movements of the 21st century: Occupy Wall Street.

That being said, how much of Occupy do you really remember?

Fresh on the heels of the Arab Spring and in response to the growing economic instability in America, Occupy Wall Street framed itself as a movement against social and economic inequality. Rallying around the slogan "We are the 99%", protestors aimed to bring light to the corrupting nature that wealth, specifically regarding major corporations, banks, and other individuals, had on American political, social, and economic structures. Within a month the movement had spread across the globe, with protests in over 900 different cities. The movement even made its way into our own town, though it had very little real success. Those participating in Occupy had in mind the goal of bringing change to the status quo, a dismantling of the institutions that keep nearly every American several steps beneath the nation's wealthiest and most influential.

Three years later it is still difficult to find a single, solidly-defined goal of the Occupy movement. There were certainly ideals at work, some basic tenants that held the collective together. At its simplest level the movement could be described as anti-capitalist, calling for some kind of regulation of wealth and income. Other than that, however, there were no clear-cut demands being made of anyone in particular. If it didn't have any real goals, Occupy must have been about just that: Occupation.

Besides the expected dissent from the right, Occupy has received criticism from many left-thinking intellectuals. Gene Sharp, a leading scholar of nonviolent action, told Al Jazeera in an interview that "The [Occupy] protesters don't have a clear objective, something they can actually achieve…Protest alone accomplishes very little." Looking back at Occupy and all that it didn't accomplish, it becomes disturbingly clear how right Sharp was. What was supposed to be a tidal wave coming to crash down on economic inequality was really just a ripple in the pond: certainly noticeable, but with very little lasting force.

Maybe that's too bold a position to take. After all, it's hard to believe that, with so many people involved in the protests, absolutely nothing happened. In a lot of ways I guess this is true; there was without a doubt some sort of social change brought about by Occupy. The average American citizen became more aware, more concerned with the economic mire they were trudging through. Major media outlets began covering the movement and its ideals. People tweeted their support. A national conversation was started and, perhaps for the first time, the general population felt like it had a voice. Suddenly anyone that was plugged in—whether through their phones or computers or televisions—could become an activist and do their part to help fight the evils that oppressed us. For a time, the American public believed that it could change the world.

The problem is that they didn't. There were no major laws passed as a result of the Occupy movement. No great economic change came. The poor are still poor and the rich are still in charge. Protestors gathered and then they went home. Those protestors were replaced with so-called Internet activists, the people that got #Occupy trending and made sure everyone on their friends list knew how broken America was. I'll admit; I was one of these people. I didn't live close enough to a major city to join their protests, didn't want to get involved in the pettiness of Occupy Erie, but still wanted to feel like I was involved in the movement. So I sat, in the comfort of my armchair, and told the Internet how much I cared about Occupy.

There's a term for this type of feel-good Internet action: slacktivism. While you may be unfamiliar with the term, you've probably seen it in action before.  Remember Kony 2012? How about the ALS Ice Bucket Challenge? These, and countless other Internet causes, are prime examples of slacktivism. The term, at its basest meaning, refers to the use of the internet as a platform for support of some social or political cause without requiring much effort or time from the participants. While many would argue that slacktivism works by raising awareness and getting lots of people involved (again, think of the Ice Bucket Challenge), it is difficult for me to ignore the word "slacker" in slacktivism.

There's evidence to support that position, too; the Washington Post reported on a study done by University of British Columbia graduate student Kirk Kristofferson that states, in short, that the more public an act of support (such as posting on Facebook for all your friends), the less likely the person is to "engage deeply" in the cause down the road. Put another way, social movements and causes on the Internet act like fads, with their popularity and prevalence often times being nothing more than a flash in the pan.

Such was the fate of Occupy. Despite the best intentions of those first thousand or so protestors, and all those that took to the streets after them, the movement lost steam. Without any clear objective or rallying point, the active protestors became scattered and dispersed. Then the internet lost interest, moved on to some new source for likes and retweets. The collective 99% rode their supposed tidal wave until it crashed, riding it back out into the sea until they could catch another.

I want to believe that collective action like Occupy can work. I want to believe that the protests in Ferguson will help bring justice to Michael Brown's killer and put an end to racially-motivated police brutality. I want to believe that carrying a mattress around a college campus can help spread awareness about rape culture. But only three years after what I thought was going to be a major historical moment, I can't shake the feeling that protest has become all but ineffectual in America, moving too quickly and transiently to have any real effect.

Chris Sexauer hopes you understand that he isn't blaming anyone that participated in any of these protests for their lack of success. If you have any questions, comments, concerns, suggestions, or complaints he can be reached at csexaur@ErieReader.com.