Pick of the Week: Paolo Schianchi

Heralded as a "rare mix of tremendous talent and humble spirit," Paolo Schianchi will bring his talents to Asbury Woods April 26. 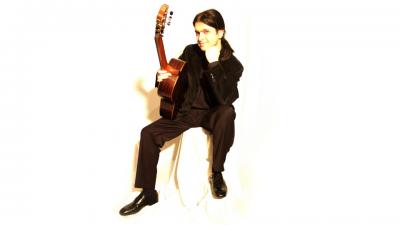 A city that's renowned for Verdi, prosciutto, and Parmesan cheese—in fact, the residents refer to themselves as Parmesans first and Italians second—resides a masterful guitarist that has been praised by both Italian and American musicians as a great musical innovator. He's regarded as a revelation in contemporary music and has been awarded first prize at several prestigious national and international competitions as both a guitarist and composer.

That city is Parma, Italy. And the musician is Paolo Schianchi.

Paolo Schianchi plays all existing variations of the guitar. He is a musician, composer, researcher, and inventor. He has gained international experience, performing with several of the world's most renowned musicians, and he's currently in the states serving as Saint Francis University's Artist-in-residence. During his time here—he heads back home in May—he is touring much of central Pennsylvania and a few outlying states, and fortunately for us, he plans to bring his talents to the Erie area. I had an opportunity to speak with Schianchi in between his teachings, and although the conversation was brief, it instilled in me a notion that even with his notoriety, his background and expertise, he takes nothing for granted, and is still very humbled and eternally grateful for the talents he holds.

"I first came to the states when I was 21," Schianchi tells me. "At the time I was studying with Matteo Mela, another renowned musician in Italy, but I met a very talented guitar player from Texas – Mitch Weverka. He believed in the talent I had and felt I needed to come to the states." Schianchi would be offered a grant and then performed stateside for a bit. Here he met his wife and moved back home.

Schianchi graduated from the University of Modena and Reggio Emilia with his first degree in music and also a ten-year Diploma in guitar, to which he then added a second post-diploma Master in Music and Guitar and a third Master in Instrumental Teaching  He has been a teacher at various European academies, and he has been invited to hold master classes at prestigious universities and schools, like the Duke Ellington School Of The Arts in Washington, D.C.

He counts his blessings. "I feel truly blessed having the talent I do. Everywhere I perform I usually have a great audience, and I always feel welcome, and I keep getting these wonderful opportunities. I do feel right now is one of the best periods in my life."

His local connection is another prolific musician: guitarist Bill Burke. "I actually met Bill for the first time in Italy. I had the opportunity to play with him in Parma. We performed together and studied each other artistically, and he was really impressed with the classical guitar and invited me to Erie. He is a wonderfully gifted musician."

Schianchi has also recorded with Burke and a variety of other talents, such as the Arturo Toscanini Orchestra, Alberto Radius (legendary Italian guitarist and arranger for Lucio Battisti), Jim Donovan (Rusted Root, Carlos Santana, Led Zeppelin, Sting), and several others. In addition, he has performed at prestigious festivals in Italy and abroad.

As it turns out, he's actually been to Erie before. "This might make you laugh," he tells me on the phone. "When I was in states, I didn't know what to expect. In fact, the one time I performed in Erie, I was really worried that I might bore the audience; it was in the back of my mind during my entire performance." Towards the end, two individuals stood up. "I thought, well, I suspected this happen – that I actually must have bored them so they're leaving." Instead, they started clapping. "All of a sudden, I realized they were giving me a standing ovation! It was overwhelming to experience, especially when I went in expecting the opposite!"

After my phone conversation, I realize through my research that Jim Donovan from Rusted Root said it best about Schianchi. "Calling Schianchi a virtuoso is like calling Pavarotti a good singer. He is the rare mix of tremendous talent and humble spirit. He makes me want to learn how to say 'wow' in Italian. It's rare to meet someone who is setting the bar for other musicians."


Paolo Schianchi will be performing as Asbury Woods Nature Center, 4105 Asbury Road at 7 p.m. Thursday, April 26. He will be sharing several six-string classical and original pieces as well as several new original offerings on his recently acquired 37 string acoustic guitar and will also be performing a bit of blues on a resophonic guitar. Tickets are $10. Please call 835.5356 for advanced sales/reservations (recommended) or email bill@billburke.net