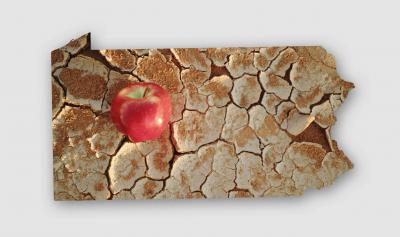 Hungry for some perspective? Here are a few "throwaway" statistics for you — in Pennsylvania, the average person discards around 166 pounds of food annually. If we were to multiply that by 12.8 million Pennsylvanians, and it would add up to a staggering 2.12 billion pounds, or over 1 million tons. Given that, it seems unfathomable that 2 million Pennsylvanians would be classified as "food insecure."

However, that was exactly the situation in 2020, made even more complicated by the strains COVID-19 put on food supply chains. In 2019, only three Pennsylvania counties had food insecurity rates of 13 percent or higher (according to the advocacy group Feeding Pennsylvania). After 2020, only three counties did not — meaning that 64 of 67, including Erie, did.

The enormity of the problem is tough to swallow — considering not only the socioeconomic ramifications but the environmental concerns as well. All that food waste that goes to landfills generates methane as it degrades, another greenhouse gas our overheating atmosphere scarcely needs. We are all stakeholders in food security during these insecure times, a point that experts like Caitlin Welsh, the director of global food security at the Center for Strategic and International Studies in Washington, D.C., have made repeatedly.

Thankfully, there are concerted efforts across the commonwealth to mitigate the issue, detailed at length in the recent virtual forum "Feeding Pennsylvania: Reducing Waste" hosted by the Governor Tom Wolf administration. Some of these initiatives touch Erie directly, while others can serve as inspiration, but all offer creative solutions to addressing food insecurity.

Funded through the state's Recycling Fund, this program offers grants of up to $200,000 to nonprofit organizations to purchase equipment that helps extend the life of food — predominantly refrigeration. With more cold storage at their disposal, far less food is disposed of. Joe Arthur, executive director of the Food Bank of Central Pennsylvania, said his organization was able to rescue 15 million pounds last year thanks to infrastructure enhancements purchased through the grant (three refurbished refrigeration trucks and a van).

Erie County organizations who were awarded grants when they were announced last May were:

The Pennsylvania Agricultural Surplus System was established in 2010 under the premise that a bumper crop should never go to rot. It connects farmers across the commonwealth with 13 local food distributors, who "PASS" on their surplus product to more than 2,700 local charitable partners that feed low-income Pennsylvanians. Farmers are compensated with income for their product, while consumers are compensated with quality nutrition they may not have received otherwise. PASS funding increased from $1 million in 2015 to $11.5 million in 2020, with $10 million of that coming through the Coronavirus Aid, Relief, and Economy Security (CARES) Act.

Other food security efforts in Pennsylvania

On a larger scale, the Carlisle-based supermarket chain GIANT Foods (not to be confused with Giant Eagle) has pioneered the "Meat the Needs" program in fellowship with Penn State Harrisburg, which freezes near-dated and expiring meat for distribution to local food banks in the vicinity of GIANT locations. If it seems like an obvious solution to address food security, GIANT Company president Nicholas Bertram agrees and hopes that other supermarket chains will adopt it as well.

On the smaller scale of neighborhoods and communities, education and access are key. Some, like Pittsburgh Chef Carlos A. Thomas of Feed the Hood and Confluence Catering, have taken to preparing high-quality, healthy meals from rescued products sourced from area establishments.

In Philadelphia, Chef Keisha Prosser has been connecting with lower-income residents of her community with her mobile and virtual cooking classes, teaching them the value of healthy meal preparation at home on a budget. She echoes a sentiment of Thomas in that you must know the people you're serving — instruction should be hands-on and participatory, not in the form of a lecture.

We are seeing similar efforts mirrored in Erie, such as Michael Hooks and his nonprofit Michael Making Lives Better, which has been serving restaurant-quality hot meals out of a state-of-the-art kitchen located within Erie's lower east side food desert (detailed in an entire episode of the Discovery Channel show Undercover Billionaire: Comeback City). Along the way, it's also given community members commercial kitchen experience, showing them how to employ fresh ingredients such as produce.

Furthering a point made by Pennsylvania Department of Environmental Protection Secretary Patrick McDonnell that food insecurity is an environmental and social injustice issue, Thomas (an African-American) asserted that the problem in his city and most others is not an inadequate influx of food. "The issue is food is redlined. We need to start reconnecting our communities back to food, whether it's putting a grocery store there, a farm, a farmstand, a restaurant. Mending the relationship between food and people is the best approach that we could take."

Because with so many leftovers, no one should be left fighting for scraps.