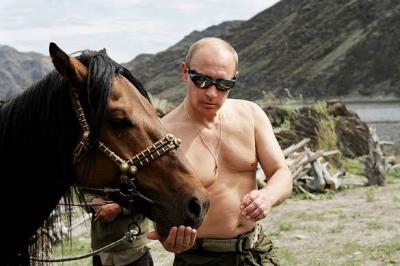 Vladimir Putin and a horse.

"We are not protecting the Syrian government," says Putin, but...well...yes, they are. Russia believes that "preserving law and order," he says, "is one of the few ways to keep international relations from sliding into chaos." Putin says, "force is permitted only in self-defense...Anything else is unacceptable," he says. Unless, of course, you're Russia, and you're invading Georgia, say, or Chechnya. "Reluctantly, we intervened," said Putin back in 1999 of Russia's invasion of Chechnya in a very different New York Times editorial, "Why We Must act." And Russia has shown little love of "law and order" there.

Poison gas was used in Syria, says Putin, "but there is every reason to believe it was used not by the Syrian Army, but by opposition forces, to provoke intervention..." UN Secretary-General Ban Ki-Moon doesn't think so. NPR doesn't think so. In fact, the only ones who think the Syrian opposition used chemical weapons are Syria's Assad regime and...well...Russia.

In short, the Putin New York Times op-ed is riddled with lies and weird assertions and strange calls for international relations and peace from a world leader that makes George W Bush seem dovish and thoughtful in comparison. (Between his strong-arm political tactics, savage repression of Russia's LGBT community, and his beefcake pics, no wonder many U.S. conservatives swoon at the thought of the Russian leader.)

Seriously. I'm against a military strike in Syria, as you no doubt know, but this sh*t irks a columnist. With one quick op-ed, Putin has fouled the waters of a potential peaceful resolution to the Syria crisis, one that Russia was urging on its, ahem, erstwhile ally, the Assad regime.

That's because Putin challenged Obama's and the U.S. belief in our national "exceptionalism." "It is extremely dangerous to encourage people to see themselves as exceptional," says Putin, "whatever the motivation." Which is, you know, kinda right – but what Putin really means is that Russia thinks it's pretty fancy, too, and wants in on the world domination thing.

Russia want its old status of superpower back. And Syria apparently is the place where that happens. At least, that's what Putin says.