Obama's red line on Syria not so straight

President Obama wants to attack Syria for crossing a "red line" on the use of chemical weapons. But where is that red line drawn? 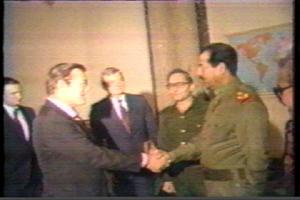 Steve Coll in the most recent New Yorker spells out the case for an attack on Syria for its use of chemical weapons on its own people. "International laws and informal warnings of retaliation are designed to dissuade dictators and terrorists from using weapons of mass destruction under any circumstances," he wrote. "A failure to enforce such norms in Syria would likely lower the threshold for chemical use in this and future wars."

Coll gives an example of such a lower threshold. The Reagan administration's tolerance of Iraq's use of chemical weapons against Iran during the two countries' war in the 1980s, argues Coll, encouraged Saddam Hussein's regime to use them again against its own people during a Kurdish uprising in 1987.

"There are red lines even in a war as devoid of clarity as Syria's," concludes Coll. "The best available evidence is that on August 21st Bashar al-Assad's forces crossed to the other side."

But do we have the right or moral standing to enforce red lines?

For starters, Coll's characterization of the Reagan administration's role in the use of chemical weapons during the Iran-Iraq war wasn't quite right. Yes, Reagan's administration did display a "colossal moral failure," but it didn't simply "stand by," as Coll wrote. The U.S. sold Iraq the materials it used to make its chemical weapons, and did so knowing full well how those materials would be used.

In fact, a pharmaceutical executive acting as a U.S. envoy met with Hussein's regime to negotiate sale of biological agents to that country. That executive, of course, was Donld Rumsfeld, later Secretary of Defense under George W Bush and a leading proponent for war with Iraq over – you got it – chemical weapons.

More importantly, the U.S. in recent year has flouted international treaties on human rights and warfare it has signed and ratified. Notably, with the Bush administration's torture program, the U.S. has broken the International Covenant on Civil and Political Rights (ratified by the Senate in 1992) and the UN Convention Against Torture (ratified in 1990). And yet no U.S. official has stood trial, or has even been prosecuted.

To many – and especially in the Middle East – the United States has been selective in when, where, and what conventions on human rights it follows. And it would be hard to blame them. Whatever credibility the U.S. earned as the defender of human rights disappeared in Abu Ghraib.

Credibility is crucial for the kind of action President Obama is contemplating. A strike would prevent the future use of chemical weapons only if those with chemical weapons believe that that's the main criteria for punishment. But because the U.S. has lately demonstrated that it acts primarily in its own geopolitical self-interest where human rights are concerned, a strike on Syria now would send an altogether different message, one that implies a deeper involvement in the Syrian conflict. And that, of course, is not a good place to be.

Red lines are fine – as long as you don't keep moving them.