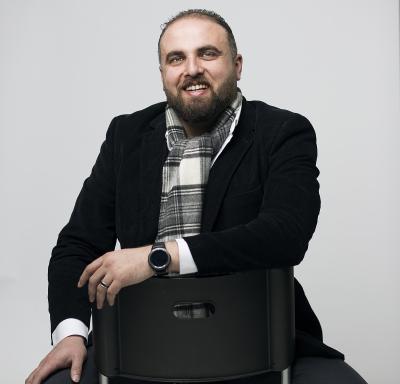 Maitham Basha-Agha: Bassam, how did you end up in Erie?

Bassam: I came to Erie in 2009 through a refugee program from Jordan. I arrived here with my wife and two kids.

MB: What do you remember from being in Jordan?

BD: Jordan was an okay place but we had issues due to me and my wife's backgrounds. My wife is from Israel and she had an Israeli passport at the time while I had a Syrian passport. We were not allowed to marry because of the two countries' differences. Each time my wife gave birth, she had to go to Nazareth. If she had given birth in Jordan, our kids would not have a nationality. We were not even allowed to have residence or citizenship there.

MB: What do you do in Erie?

BD: Better question is what I don't do [laughs]. I work for the Erie International Institute as a Micro-Enterprise Coordinator; we give out loans to refugees who have a business background. I help them develop a business plan to get them started. This loan must be paid within two years.

MB: Please tell us more about the refugee and immigrant population of Erie.

BD: Those people are very excited to start their new lives here in Erie due to the low cost of living. Many come here not knowing the English language but Erie is not overwhelming for them like big cities. Erie is also safe and there are opportunities for them.

MB: Recently you opened Sham Market. What is it?

BD: Erie has more than 70 Syrian families. I was encouraged by those families to start Sham Market. I put up a business plan and this particular shop on 12th and Wayne was born. Sham is the second name to Damascus [Syria]. Sham is a store that provides foods that are not in chain stores. We have figs, halal meat, spices, and grilled Middle Eastern food.

MB: We hear so much about the situation in Syria, can you tell us your perspective on what's going on?

BD: Good question. Today, the media has its own agenda. What I'm seeing now is the Syrian citizens are the victims of the war. It's unfair. Big countries are fighting on Syrian land [America, Iran, Russia, and Turkey]. The people had no choice but to flee. Many have lost their jobs, properties, family members, and much more.

MB: What does the future hold for Syria?

BD: Honestly, nobody knows. We hope and pray for everything to be fine but what we are seeing today is a tragedy. The young generation is suffering the most. Many are witnessing war, starvation, and hurt.

MB: The travel ban blocked your parents from entering America in 2017. Can you tell me what you were going through?

BD: I had to wait five years to get my citizenship so I could petition for my parents to come to America. My father has health issues so I wanted him to be treated here. I worked on their visa and both were accepted under the Refugee Visa Program. In 2017, the new administration put up the "Muslim Ban" which prevented my parents from coming here at the time. Our dreams of being together were crushed. There were a lot of tears and I was scared for them. A few months later, the travel ban was lifted and I was able to reunite with my parents.

MB: Are you happy to be in Erie?

"We work here and our kids go to school here. We tried to relocate to big cities but we just kept coming back. There is this attachment we have to Erie and it feels like home."
Bassam Dabbah

by Maitham Basha4/3/2018, 9:54 AM
I wanted people my age to see that kids can aim speak honestly, maturely, and respectfully and succeed in getting their point across while doing so.

by Maitham Basha3/28/2018, 10:15 AM
Brian Slawin shares his optimistic outlook for small manufacturers and technology entrepreneurs in northwestern Pennsylvania.